It’s been nearly two years since Kerri Walsh Jennings won her third straight Olympic gold with Misty May-Treanor and about one year since she began playing internationally with new partner April Ross.

Based on early results, Walsh Jennings and Ross could very well be playing for gold two years from now in Rio de Janeiro.

Walsh Jennings, 35, paired with Ross, 32, following May-Treanor’s retirement and the birth of Walsh Jennings’ third child. Ross is a star in her own right, winning the 2009 World Championship and 2012 Olympic silver with Jennifer Kessy.

This week, they’re the star pair at the biggest beach volleyball tournament in the U.S. this year — the World Series of Beach Volleyball in Long Beach, Calif., which will air on NBC, NBCSN, Universal Sports and NBC Sports Live Extra from Friday through Sunday.

Long Beach marks the seventh FIVB World Tour Grand Slam event this season. Walsh Jennings and Ross are the only women’s team to win multiple Grand Slams this year and are the world’s No. 1 team in the FIVB’s technical rankings.

Walsh Jennings’ biggest competition during the May-Treanor years usually came from Brazil. Of course, the Brazilians will be pumped at their home Olympics in 2016, but their top players are still in a transition phase since London 2012.

The London Olympic bronze medalists, Juliana and Larissa, broke up with Larissa’s retirement in 2012. Larissa recently unretired, but she is now paired with a different Brazilian partner.

Last year’s World Championships final did not include a Brazilian pair for only the second time in its nine-edition history (Walsh Jennings and Ross missed the tournament). However, the best women’s pair on the World Tour was Brazilian, Talita and Taiana, who are now no longer a pair.

In Long Beach, the top-seeded Walsh Jennings and Ross won their first two pool matches Wednesday and will look to advance through elimination rounds to Sunday’s final.

A U.S. Olympic champion is also a top seed on the men’s side. Beijing gold medalist Phil Dalhausser and two-time Olympian Sean Rosenthal won their first two matches Wednesday, too. The men’s final is also Sunday. 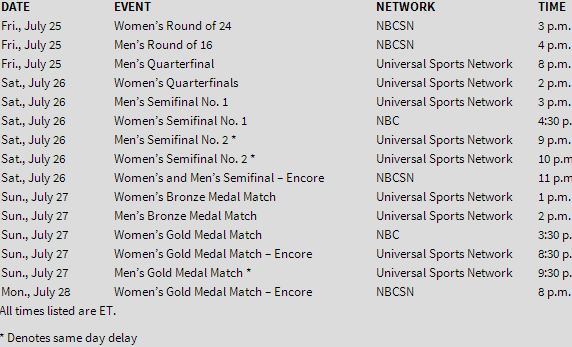 Before Mikaela Shiffrin can hold the World Cup wins record, she can become the most decorated Alpine skier in modern world championships history.

Shiffrin takes a respite from World Cup pursuits for the biennial world championships in France. She is expected to race at least four times, beginning with Monday’s combined.

Shiffrin has a tour-leading 11 World Cup victories in 23 starts this season, her best since her record 17-win 2018-19 campaign, but world championships do not count toward the World Cup.

Shiffrin remains one career victory behind Swede Ingemar Stenmark‘s record 86 World Cup wins until at least her next World Cup start in March.

Shiffrin has been more successful at worlds than at the Olympics and even on the World Cup. She has 11 medals in 13 world championships races dating to her 2013 debut, including making the podium in each of her last 10 events.

Worlds take place exactly one year after Shiffrin missed the medals in all of her Olympic races, but that’s not motivating her.

“If I learned anything last year, it’s that these big events, they can go amazing, and they can go terrible, and you’re going to survive no matter what,” she said after her most recent World Cup last Sunday. “So I kind of don’t care.”

This year’s combined is one run of super-G coupled with one run of slalom (rather than one downhill and one slalom), which also plays to her strengths. She won that event, with that format, at the last worlds in 2021. The combined isn’t contested on the World Cup, so it’s harder to project favorites.

Shiffrin is also a medal contender in the super-G (Feb. 8), despite starting just two of five World Cup super-Gs this season (winning one of them).

She is not planning to race the downhill (Feb. 11), which she often skips on the World Cup and has never contested at a worlds. Nor is she expected for the individual parallel (Feb. 15), a discipline she hasn’t raced in three years in part due to the strain it puts on her back with the format being several runs for the medalists.

Norway’s Lucas Braathen, the world’s top male slalom skier this season, is doubtful to compete in the world championships slalom on Feb. 19 after appendix surgery on Tuesday.

“It’s been a tough couple of days fighting after surprisingly finding out about quite an intense infection on my appendix,” Braathen, a 22-year-old soccer convert with a Brazilian mom, posted on social media. “I’ve been through surgery and I’m blessed that it went successfully.”

The Norway Alpine skiing team doctor said Braathen’s recovery will take a few weeks, but there is a small possibility he can make it back for the world championships slalom, which is on the final day of the two-week competition.

Braathen has two slalom wins and one giant slalom win this World Cup season. He will miss Saturday’s slalom in Chamonix, France, the last race before worlds. Countryman Henrik Kristoffersen and Swiss Daniel Yule can overtake him atop the World Cup slalom standings in Chamonix.

Braathen entered last year’s Olympics as the World Cup slalom leader and skied out in the first run at the Games.