She won skeleton silver at the Sochi Olympics eight months ago. Her home track in Park City, Utah, hasn’t opened for the winter season yet. Pikus-Pace plans to travel to the track at Utah Olympic Park in a couple of weeks.

Pikus-Pace first retired after the 2010 Olympics, but a year and a half later she found herself at that same Park City track. Her husband, Janson, challenged her to take one last run. She obliged, and it sparked a comeback.

Pikus-Pace, 31, insists she is happily retired after her emotional performance in Russia, returning from a fourth-place finish at Vancouver 2010, that retirement, having her second child and just about climbing to the top of her sport.

“It will be hard to just turn and walk away from it, but I think everybody needs to know when it’s time to move on, and I feel like I’ve done what I needed to do,” Pikus-Pace said Wednesday night at the Women’s Sports Foundation awards on Wall Street, where she received the Wilma Rudolph Courage award.

She’s watched her Olympic runs plenty of times in the last eight months.

“I get those emotions every time I see it,” she said. “It doesn’t matter how many times I’ve seen it.”

Pikus-Pace slid into a new career — motivational speaking. She shared her message of perseverance to events and groups such as Time Out for Women in Sacramento, Calif., the Utah Technology Council and Monroe Middle School in Wheaton, Ill. 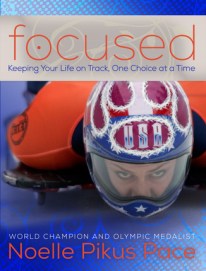 She was approached to write a book the day after she returned from Sochi, spent copious amounts of airline time writing it, turned in a draft in April and saw it released last month. “Focused: Keeping Your Life on Track, One Choice at a Time,” is 137 pages.

Now, she’s doing more personal book signings, where people tell her she inspired them to overcome struggles in their lives. Pikus-Pace recently did a double take driving around a mountain near her home.

“It was a big picture of my face on this billboard,” she said. “It was to market my book. I didn’t even know they were promoting it that way.”

The book was high on her post-Olympic bucket list. Also on it?

“[Having kids] is not very aerodynamic for our sport,” she said, “so I can’t really come back.”

Traycen, 3, is in preschool. Lacee, 6, is in first grade and playing the piano. You may remember Lacee taking skeleton runs last season. Pikus-Pace joked she would prefer Lacee choose a different sport.

“Tennis, golf,” she said. “Something more lucrative and in the sun.”

The Olympic flame will travel from Athens to Marseille by ship in spring 2024 to begin the France portion of the torch relay that ends in Paris on July 26, 2024.

The torch relay always begins in the ancient Olympic site of Olympia, Greece, where the sun’s rays light the flame. It will be passed by torch until it reaches Athens.

It will then cross the Mediterranean Sea aboard the Belem, a three-masted ship, “reminiscent of a true Homeric epic,” according to Paris 2024. It will arrive at the Old Port of Marseille, welcomed by an armada of boats.

Marseille is a former Greek colony and the oldest city in France. It will host sailing and some soccer matches during the Paris Olympics.

The full 2024 Olympic torch relay route will be unveiled in May.

Before Mikaela Shiffrin can hold the World Cup wins record, she can become the most decorated Alpine skier in modern world championships history.

Shiffrin takes a respite from World Cup pursuits for the biennial world championships in France. She is expected to race at least four times, beginning with Monday’s combined.

Shiffrin has a tour-leading 11 World Cup victories in 23 starts this season, her best since her record 17-win 2018-19 campaign, but world championships do not count toward the World Cup.

Shiffrin remains one career victory behind Swede Ingemar Stenmark‘s record 86 World Cup wins until at least her next World Cup start in March.

Shiffrin has been more successful at worlds than at the Olympics and even on the World Cup. She has 11 medals in 13 world championships races dating to her 2013 debut, including making the podium in each of her last 10 events.

Worlds take place exactly one year after Shiffrin missed the medals in all of her Olympic races, but that’s not motivating her.

“If I learned anything last year, it’s that these big events, they can go amazing, and they can go terrible, and you’re going to survive no matter what,” she said after her most recent World Cup last Sunday. “So I kind of don’t care.”

This year’s combined is one run of super-G coupled with one run of slalom (rather than one downhill and one slalom), which also plays to her strengths. She won that event, with that format, at the last worlds in 2021. The combined isn’t contested on the World Cup, so it’s harder to project favorites.

Shiffrin is also a medal contender in the super-G (Feb. 8), despite starting just two of five World Cup super-Gs this season (winning one of them).

She is not planning to race the downhill (Feb. 11), which she often skips on the World Cup and has never contested at a worlds. Nor is she expected for the individual parallel (Feb. 15), a discipline she hasn’t raced in three years in part due to the strain it puts on her back with the format being several runs for the medalists.