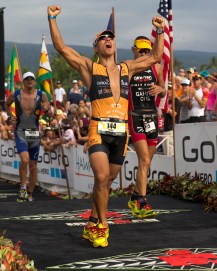 Apolo Ohno said he went into “full warrior mode” in completing the Ironman World Championships in his goal — under 10 hours — on Oct. 11.

“Conquering the Ironman enriched me physically, emotionally and mentally and it will be a milestone in my life, among my eight Olympic medals, that I will always remember,” Ohno wrote in a Seattle Times blog.

Ohno, 32, owns the U.S. record for Winter Olympic medals with eight over three Winter Games in 2002, 2006 and 2010 before retiring. He’s also won Dancing with the Stars, played a role in a TV movie and hosted a TV game show.

“The Ironman World Championship was like no other event I have experienced,” he wrote. “I wanted to cross the finish line knowing I left everything I had out on the course — which I can honestly say I did.”