Peter Forsberg, one of the most iconic Olympic hockey players, will be inducted into the International Ice Hockey Federation Hall of Fame on Monday.

Forsberg began his senior international career by winning the World Championship with Sweden in 1992, three months after the Albertville Olympics.

Forsberg, then 18, would have been the youngest player (by three years) on the 1992 Sweden Olympic team had he been selected.

He was asked about the possibility of making the 1992 Olympic team on the day he was taken by the Philadelphia Flyers in the first round of the 1991 NHL Draft.

Sweden finished fifth in Albertville without him.

Forsberg was plenty good enough for the Lillehammer 1994 Winter Games. He was the second-youngest player on the team. 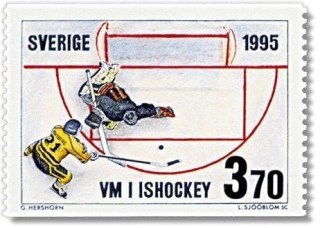 Forsberg was among the 1994 tournament leaders with six assists, but he is best remembered for scoring the gold medal-winning goal in the seventh round of an extended shootout with Canada in the final.

Forsberg skated to Canadian goalie Corey Hirsch‘s right and, as Hirsch lunged to his right, Forsberg cheekily leaned his arm and stick across Hirsch’s body and swept the puck into net.

The goal was commemorated on a Swedish stamp. Forsberg had exceeded the pre-Games billing as one of the most promising players in the tournament, the final Olympics before NHL players joined.

“It was and will always be a big part of my career and something that catapulted me into celebrity status in the hockey world,” Forsberg told NHL.com.

Forsberg returned for the Nagano 1998 Olympics, after winning Rookie of the Year and a Stanley Cup with the Colorado Avalanche.

In Nagano, Sweden fell to Finland in the quarterfinals and was coached by Forsberg’s father.

After missing the 2002 Olympics due to injury, Forsberg led Sweden with six assists en route to gold at the Torino 2006 Winter Games. He helped set up the game winner in a 3-2 victory over Finland in the final.

“When I was 20, I didn’t know how hard it would be to get back and win another gold medal,” Forsberg, who flew to Italy with a groin strain and didn’t play in the first two games, told media after the game.

Those were expected to be Forsberg’s final Olympics, but he returned for the Vancouver 2010 Olympics at age 36, almost two years after his last NHL game. (Forsberg later made a two-game NHL comeback in 2011.)

Forsberg did not star in Vancouver, recording one assist in four games as Sweden lost to Slovakia in the quarterfinals.

“This is not the way we wanted it to end,” Forsberg told The Associated Press after his final Olympic game.

Forsberg finished his Olympic career with two goals and 17 assists, according to sports-reference.com, a testament to his skills as one of the sport’s greatest playmakers.