“This is the most inside look I’ve ever given to my world,” Vonn said, “and I hope it inspires others who are going through challenges to keep getting back up when they are down.”

On Feb. 5, 2013, Vonn crashed in the World Championships super-G in Schladming, Austria. She suffered complete MCL and ACL tears in her right knee, was airlifted off the course and needed season-ending surgery.

Vonn reinjured the knee in a training crash Nov. 20, 2013, re-tearing her right ACL. She attempted a comeback for the Sochi Olympics, but her knee gave out in a race in Val d’Isere, France, one month later. She withdrew from Sochi and had another surgery. 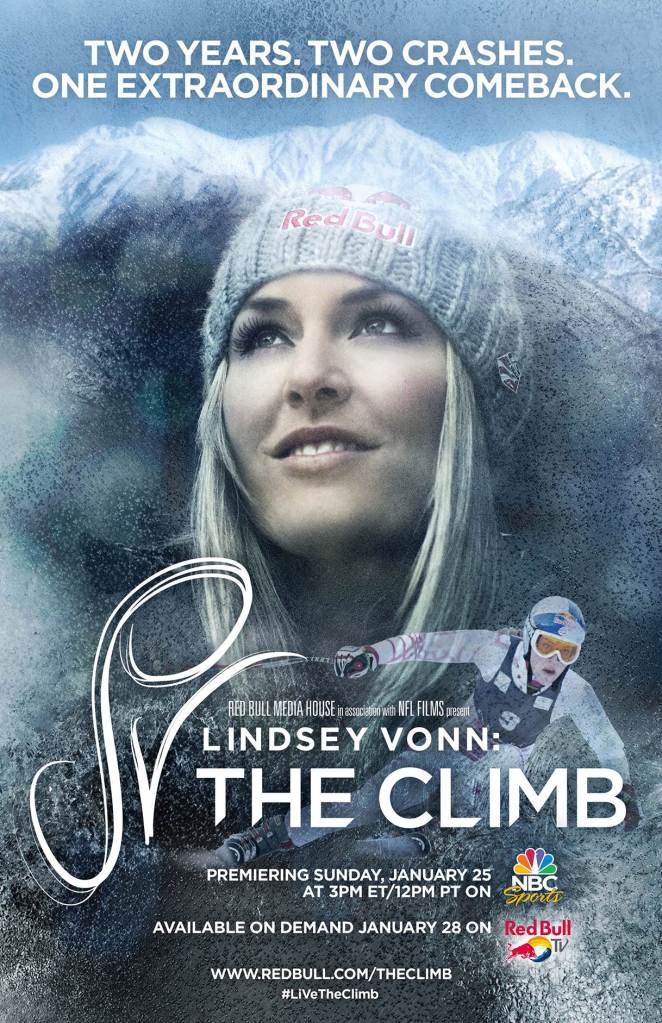 Vonn returned to skiing in competition last month and won two of her first four races, moving within one victory of the all-time women’s World Cup record. She can match the record at this weekend’s races in Austria.

The documentary also follows Vonn’s physical and emotional struggles over a two-year journey back to the top of her sport, including having to watch the Sochi Olympics with her family at home.

“’Lindsey Vonn: The Climb’ will invite viewers inside Lindsey’s journey and a very personal part her life rarely seen by the public,” said Joe Gesue, Senior Vice President, Production, NBC Olympics and Executive Editor, NBC Sports Group. “This film is a compelling and very human portrait of an extraordinary athlete fighting pain and uncertainty to regain her place as the dominant figure in one of the most demanding and dangerous sports in the Olympic world.”

Vonn will return to the World Championships near her home in Vail/Beaver Creek, Colo., next month, with unprecedented coverage from NBC Sports and Universal Sports.

Encore presentations of “Lindsey Vonn: The Climb” will air on NBCSN beginning in February. The film will be available digitally on Red Bull TV starting Jan. 28.

The film was produced by Red Bull Media House, in association with NFL Films and NBC Olympics.

“Films like this don’t work without transparency, and Lindsey was on board from day one,” said Steve Trout, Director, NFL Films. “She knew for us to tell her story that she had to let us in – and she did. In ‘The Climb,’ you’ll see Lindsey the daughter, the sister, the friend. And in the roller-coaster ride of her comeback, you’ll see Lindsey in pain, at rock bottom, and her triumphant return to racing.”