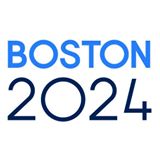 Bid officials detailed plans from the Boston 2024 presentation made to the U.S. Olympic Committee in December. Here are the documents.

“Last but not least, of course we have our historic Fenway Park, which will be the venue for baseball,” said Cheri Blauwet, a seven-time Paralympic champion wheelchair racer and co-chair of the Olympic and Paralympic movement committee.

Baseball is, of course, not in the Olympic program but could be added for the 2024 Olympics under Agenda 2020 reforms passed in December.

The mention of Fenway Park reinforces that the current plan is just that, a “plan” and not the definite application that will be submitted to the International Olympic Committee by a Sept. 15 deadline.

They stressed two factors overall — walkability and ease of transport.

The waterfront cluster would include the temporary Olympic Stadium in Widett Circle — “the heart of the city” — the athletes’ village, the use of the Boston Convention and Exhibition Center for wrestling and indoor volleyball among six sports and sailing in Boston Harbor.

The Olympic Stadium would host track and field and Opening and Closing Ceremonies.

The university cluster would be at the intersection of Harvard, Boston University and MIT including aquatics events in temporary facilities and triathlon and open-water swimming at Magazine Beach. Harvard Stadium would be used for field hockey with tennis and fencing also at Harvard. Boston University would host badminton and handball. MIT would host archery on its front lawn.

TD Garden would host a basketball final (it didn’t specify men’s or women’s) and artistic gymnastics. Gillette Stadium would host rugby and soccer.

Golf would be at The Country Club at Brookline, the site of the famous 1999 Ryder Cup and 1913 U.S. Open won by Francis Ouimet.

Boston Common would hold beach volleyball with a nearby start line for the Olympic marathon and cycling at Charles Street. 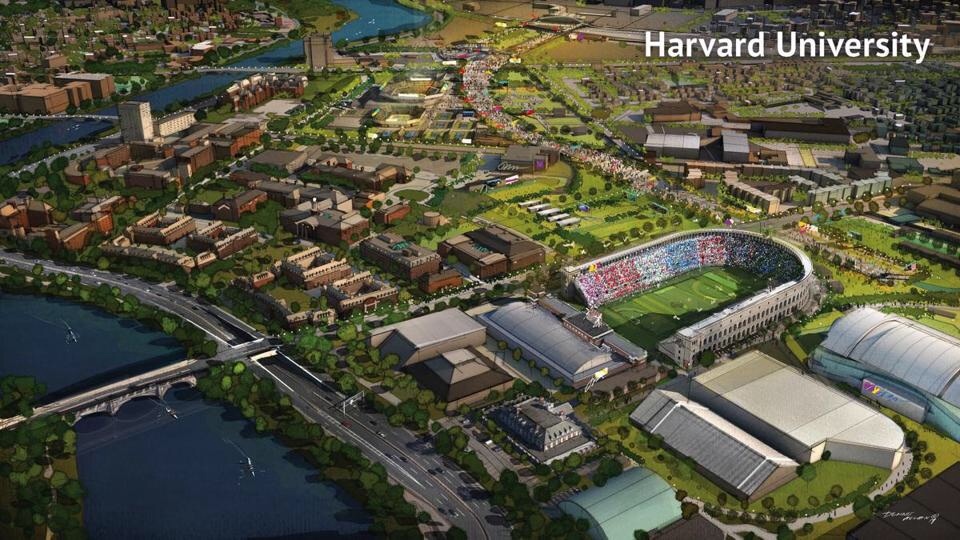 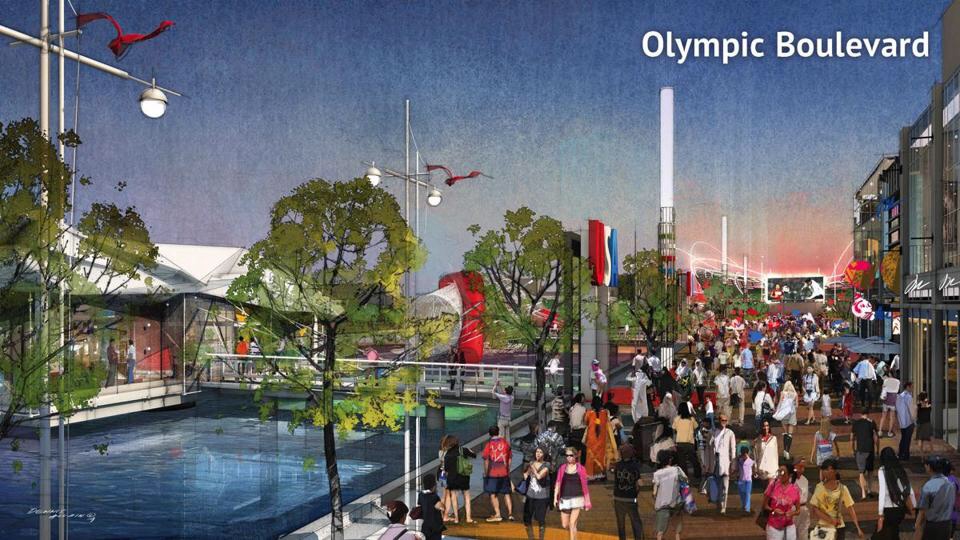 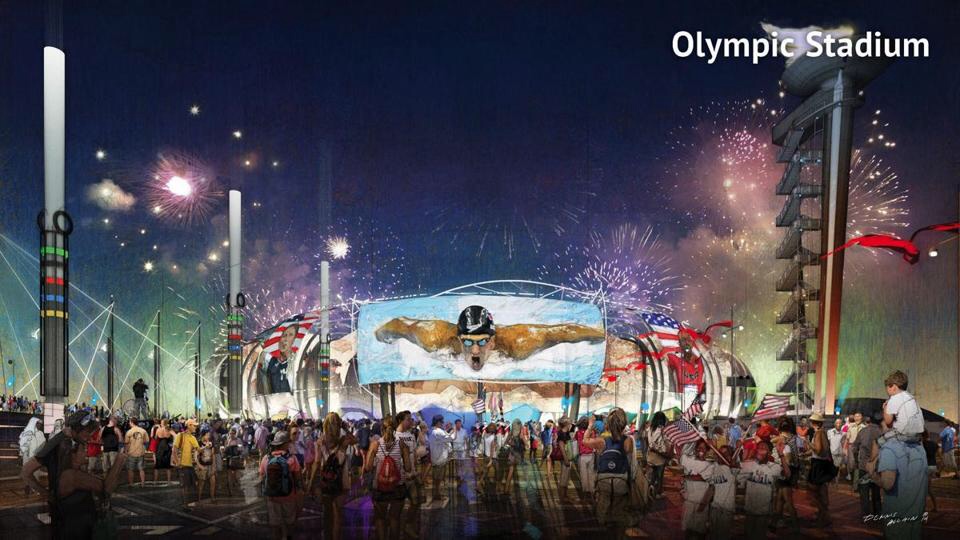 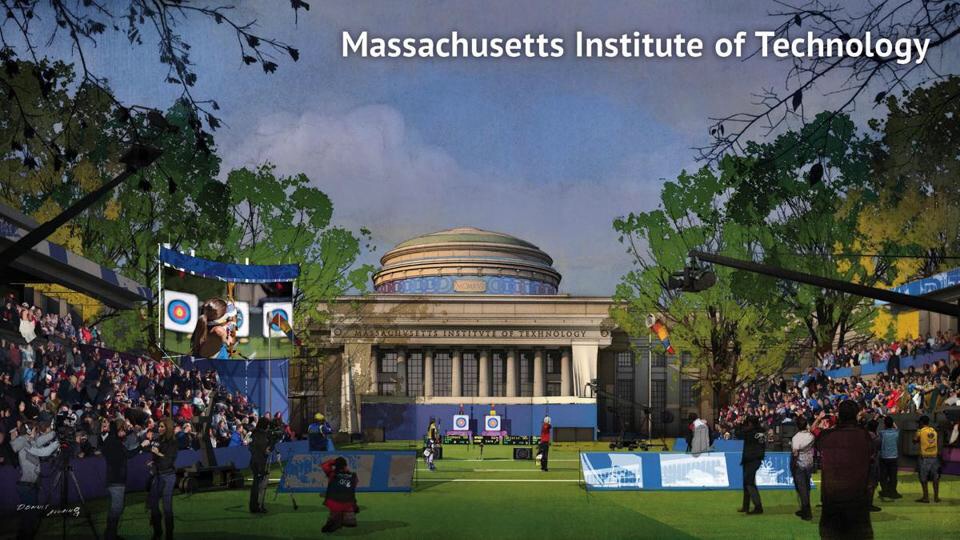 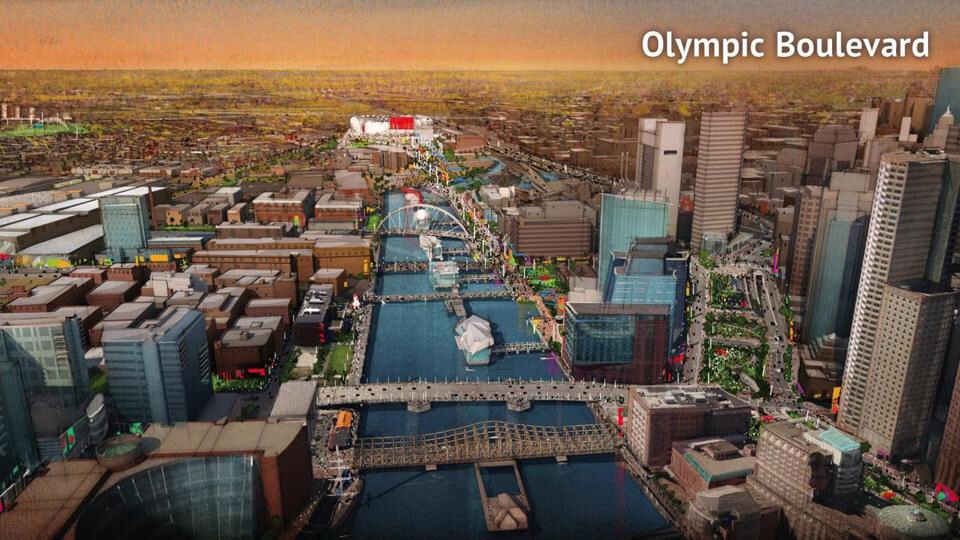 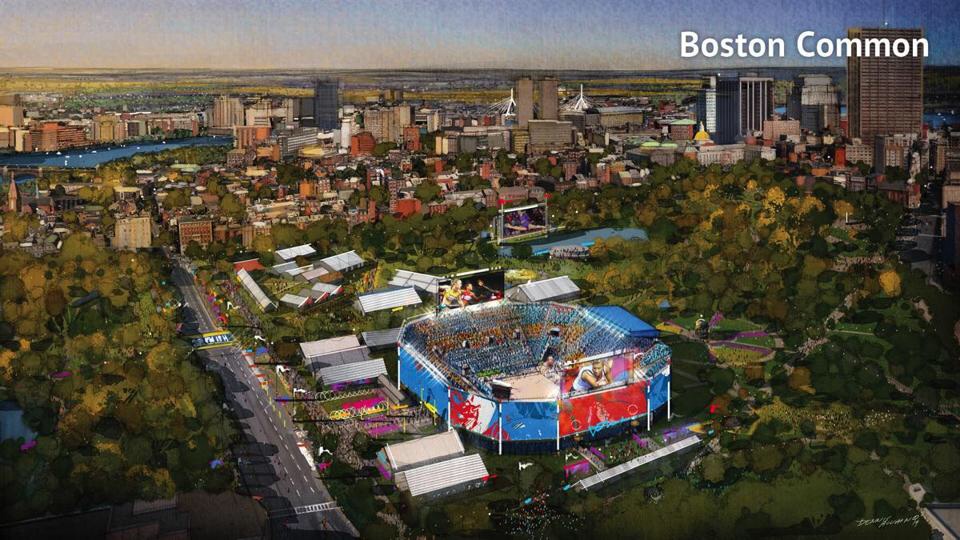 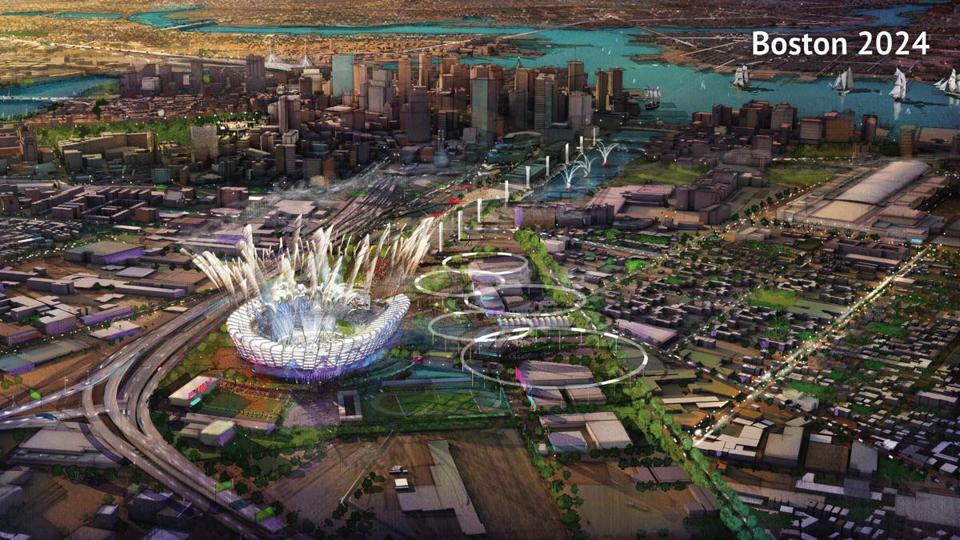 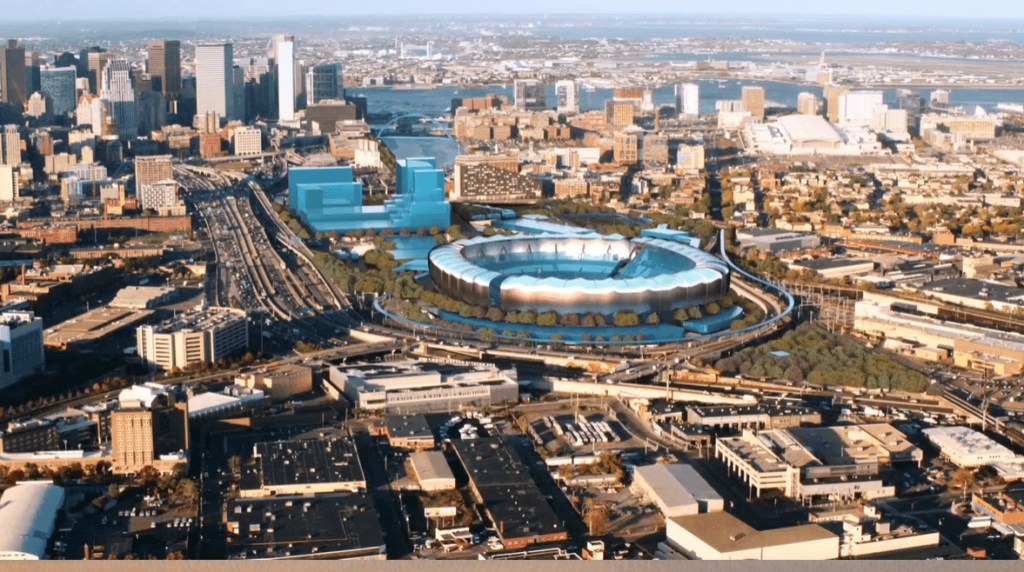 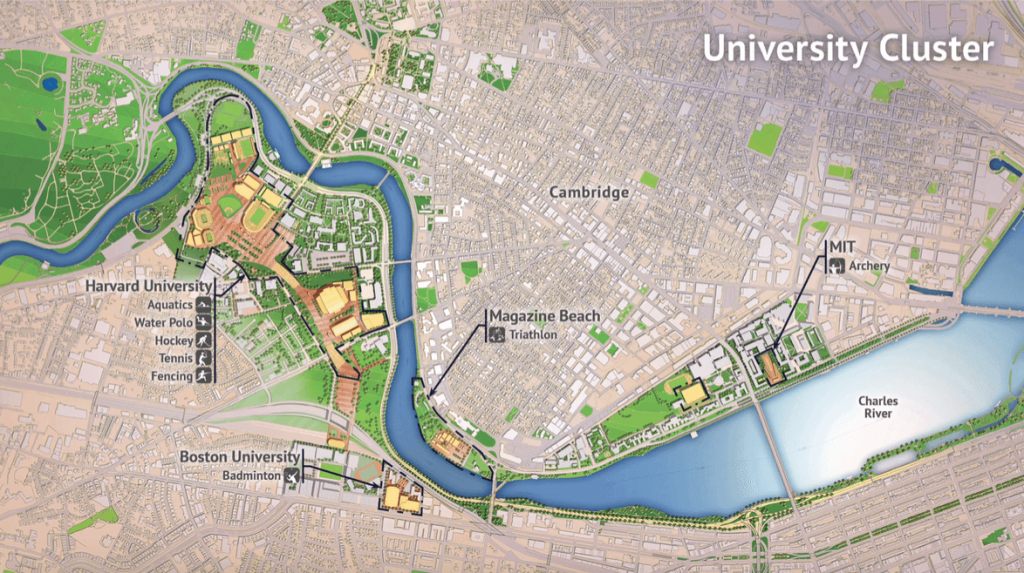 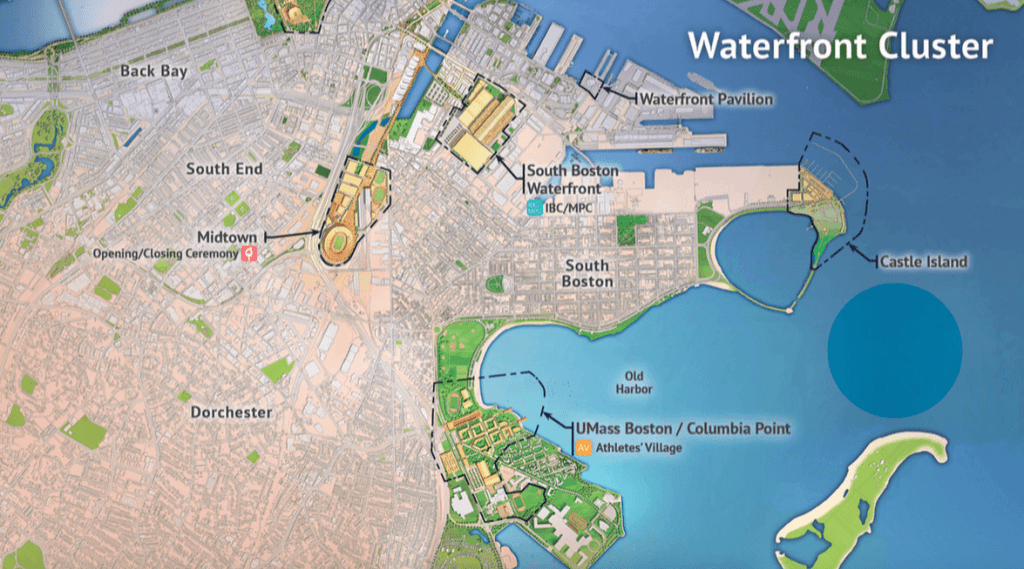 In just a few months since reuniting, Kelly Cheng and Sara Hughes have become not just the best women’s beach volleyball team in the U.S., but also, arguably, the world.

Cheng and Hughes, former partners who got back together for a 2024 Olympic run, won the World Tour Finals for the biggest title for a U.S. pair since April Ross and Alix Klineman took gold in Tokyo.

Cheng and Hughes have entered four tournaments since reuniting last fall and won all of them — once on the domestic AVP tour and now three international events.

They are rolling into the start of the 2024 Olympic qualifying window next week. It’s likely that the top two U.S. women’s pairs across international events over the course of the next 18 months qualify for the Paris Games.

Cheng and Hughes were previously NCAA champion teammates at USC, then the most promising, young U.S. pro team before splitting in 2018. Cheng made the Tokyo Olympics with Sarah Sponcil (lost in the round of 16), while Hughes’ Tokyo bid flamed out when partner Summer Ross suffered a back injury in 2019.

“It was a lot of the unknown and being young and kind of immature and listening to maybe outside forces and not really knowing how to deal with things as well,” Hughes said in October of their past breakup. “We’ve pretty much moved past that in our relationship. Moving forward with one another, we’re completely different players, and we’re a lot more mature. It feels like the right time. The past is past. We’re just moving forward.”

Cheng and Hughes have taken over from April Ross and Klineman as the top U.S. team. After winning Olympic gold, Klineman underwent shoulder surgery in January 2022 and last week announced she is pregnant and may return from childbirth for a “last-second” 2024 Olympic qualifying bid.

April Ross, a 40-year-old with an Olympic medal of every color, last competed in March, then withdrew before June’s world championships, where she was entered with Emily Day, with an unspecified injury. She has not announced if or when she plans to return to competition.

The U.S. has won at least one beach volleyball medal at every Olympics that the sport has been on the program (since 1996). Eighteen months out from the Paris Games, Cheng and Hughes are the best hope to keep the podium streak going.

In the two-man, Lochner became the first driver to beat countryman Francesco Friedrich in an Olympic or world championships event since 2016, ending Friedrich’s record 12-event streak at global championships between two-man and four-man.

Lochner, 32, won his first outright global title after seven Olympic or world silvers, plus a shared four-man gold with Friedrich in 2017.

Americans Steven Holcomb and Steven Langton were the last non-Germans to win a world two-man title in 2012.

Bobsled worlds finish next weekend with the two-woman and four-man events.