The Olympic flame will visit all 26 Brazilian state capitals (and the federal district capital of Brasilia) among 250 cities and towns. Torch bearers’ legs will be 300 meters, and the flame will visit 90 percent of the nation’s population.

The flame will also travel 10,000 miles by airplane.

The torch design has not been revealed yet, but the torch relay logo (upper right) hints at the design, organizers said.

This torch relay appears to be a bit simpler than Sochi’s, which took the Olympic flame into the world’s deepest freshwater lake, the North Pole and outer space.

It won’t be the first time the Olympic flame visits South America. It also came to Rio de Janeiro for a seven-hour tour as part of the Athens Olympic torch relay on June 13, 2004.

Soccer legend Pele, though not an Olympian, was the first person to run with the Olympic flame in South America that day, according to The Associated Press.

“Today, I have the privilege of being the first Brazilian to carry the torch in our country and that is something for which there is no comparison,” said Pele, then 63, after running 400 meters, according to the AP.

Here are images from the 2004 Olympic torch relay’s visit to Rio, via Getty: 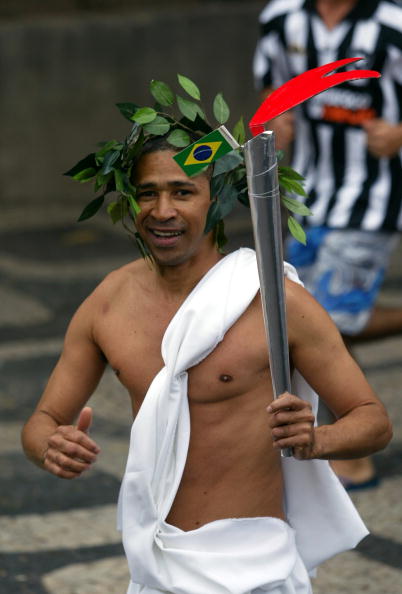 Video: Animation of what Rio Olympic Park will look like