Galen Rupp likes to say he pretended the 80,000 deafening cheers were for him while running the London Olympic 10,000m final, and not just for Britain’s Mo Farah, his training partner in Oregon.

Perhaps the illusion didn’t vanish immediately after Rupp eclipsed the finish line in second place, a half-second behind Farah. Rupp had become the first American man in 48 years to earn an Olympic medal in the East African-dominated event.

Thirty seconds later, the noise had not diminished.

Rupp hunched over lane nine, hands covering bloodied kneecaps, and pulled the 127-pound Farah up from the curved track upon which Rupp had just spit.

Then Rupp looked out into Olympic Stadium, raised his right hand and extended the index finger. No. 1. Rupp’s eyes shifted, and, less than a second later, he extended a second finger. No. 2, actually. 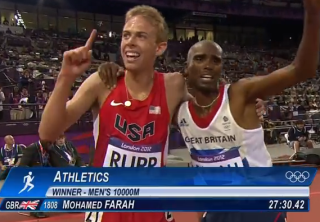 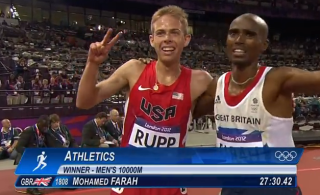 Less than two years before the Olympics, Rupp had questioned coach Alberto Salazar‘s plan to add Farah to their training group, leery of a rival gaining from Salazar’s finely tuned programs and Nike’s resources.

As the race turned out, the only athlete that stood between Rupp and Olympic gold was that training partner, a Somalian-born Londoner with similar interests (soccer, not just running). It’s not uncommon in Olympic sports.

It was about four years ago that Farah decided to move to Oregon, and the trek toward the London one-two began. Now, Rupp, at 28, knows his best shot at Olympic gold may come in Rio de Janeiro (he remembers talking with Salazar while in high school about his prime Games years being 2012 and 2016).

Here are excerpts from the interview:

OlympicTalk: You’re an Oregon guy. Were you stunned by Doha getting the 2019 World Championships over Eugene?

Rupp: I wouldn’t say I was stunned. I think Doha was always the front-runner going in. But I was disappointed. I was involved with it. It would have been a dream for me to be able to compete on home soil, basically my hometown.

OlympicTalk: How is it going to be different racing at a World Championships in Doha versus Eugene?

Rupp: Obviously, the weather is going to be a huge factor. Eugene is perfect at that time of year. Occasionally, you get some rain. For me, it just feels like fans are so great in Eugene. They get behind everything so much. It’s just a special place to run. They know everything about every athlete competing.

OlympicTalk: Mo Farah has been training in Africa, when was the last time you trained with him?

Rupp: November/December. He’s always gone over there. I think he just doesn’t want to change anything. It’s obviously worked for him in the past. I’m sure we’ll get back together and train, hopefully, in the spring.

OlympicTalk: I know you’ve got a family now, and kids, but have you thought about going with him over there?

Rupp: That’s too far for me. I’ve never been over there, so I guess it would be cool to see once. But I don’t really have any desire to go over there. I’m plenty content training in Portland in the winter, or for me to go to altitude, there are plenty of good places in the U.S. as well.

OlympicTalk: You’ve talked about moving up to the marathon at some point. Did watching Mo’s adversity in trying a marathon last year affect you?

Rupp: Nah. In all honesty, I’m really excited for whenever it is that I choose to move up. Right now, my focus is on the track through the Olympics. After 2016, I’ll be able to start looking at when a marathon might fit in. It was a good reminder how tough it is [seeing Farah]. A lot of times, you just think about something going really, really well. It’s a big jump. It’s a big change. It’s so different training from 10K to a marathon. I’ll be the beneficiary from him, learning what worked and what didn’t, advice he might have for whenever I choose to move up. But I’m still excited for it. The marathon, there’s something special about it. That, the mile and the 100 meters are the three biggest events.

OlympicTalk: Did you wake up early to watch Mo run the London Marathon?

Rupp: I watched the last little bit of it. But I didn’t watch the whole thing.

OlympicTalk: Does it put a little bit more pressure on you thinking that 2016, given your age, might be your best shot at an Olympic gold medal?

Rupp: It does a little bit, yeah. Now that we’re here, there’s definitely a little bit more of a sense of urgency. But, to be honest, as far as pressure, the Olympics are enough pressure in itself. They only come every four years. You never know, an injury tomorrow and you can never run again.

OlympicTalk: Can you sense being closer to Mo in training? Where do you see yourself in comparison with him?

Rupp: I’m not so much just concentrated on him. Obviously, he’s been the best. But there’s a ton of good guys. It seems like every year, there’s another few of them that pop up that are going to be right up there. He’s a few years older than me, so I’ve got that working for me (smiles). We’ve always been really close in training. It’s never been like we just try to beat the hell out of each other. We’re never competing like that at the end of stuff. We’ve always been really close. That’s been one of the great things about being able to train with him, that we’re able to get so much more out of each other when we’re running together. I was pretty close in London.

OlympicTalk: What was going through your mind during the Olympic 10,000m medal ceremony? What’s the silver medalist’s mentality?

Rupp: Silver was such a blessing. I was so happy to get it. A lot of people will say, well, are you disappointed you didn’t get gold? My response is usually more like I was thrilled to get the silver medal. Then afterwards it hit me that I’m really close right now. I know I can make that step. I was thisfar away. I really wanted to take some time to enjoy what I did there. Definitely, the day after, it was, what do I have to do to get better. Weaknesses that I have, areas that I need to address. I’ve got four years to get it right. Ever since then, that’s been my total focus.

OlympicTalk: Do you still have the “Stop Rupp” T-shirt from the 2008 U.S. Olympic trials?

Rupp: My mom definitely has one. I think I still have it somewhere in a box. I’m terrible with all that stuff.

OlympicTalk: You get drug tested more than anybody else. What’s the weirdest setting you’ve been called on for an out-of-competition test?

Rupp: One time in college, I was driving back from Portland, something like that. I got a call. You’ve got to be tested. I met them at a truck stop off the side of the highway. I went in there, and of course, they have to watch you go to the bathroom and stuff. Of course, we got a lot of weird looks from truckers walking along, wondering what the heck is going on. Then we put everything in the bottles and the paperwork on a picnic table outside.