The high praise continues to roll in for U.S. gymnast Simone Biles.

“There is the men’s gymnasts that have this much power, and then there is women’s that have this much, way down here, and she has closed it,” two-time U.S. Olympian Jonathan Horton said in a report from NBC affiliate WTHR in Indianapolis. “She is the first female gymnast I have ever seen that is as powerful or maybe more than the most powerful male gymnast.” 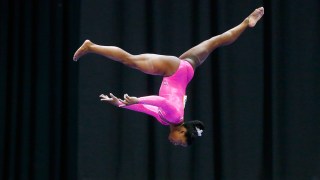 Biles is set to compete in the Secret U.S. Classic in Hoffman Estates, Ill., on Saturday (7:30-9:30 p.m. ET on Universal Sports) and the P&G Championships in Indianapolis in August.

Martha Karolyi to step down after Rio 2016