Usain Bolt was briefly taken down at the Bird’s Nest for the first time, by a Segway on his victory lap after winning the 200m at the World Championships on Thursday night.

“They tried to kill me. I don’t know what’s going on,” Bolt said on the BBC, adding later on Universal Sports, “accidents happen.”

A cameraman was filming Bolt interacting with fans on his victory lap when it appeared he briefly lost control of his Segway, colliding with Bolt.

Bolt tumbled to the track and somersaulted, with a smile, and quickly got back up. He said he would be fine for the 4x100m relay on Saturday.

“I have a few cuts, but it’s nothing I haven’t done to myself in training,” Bolt said on BBC radio. “I wasn’t looking. I was waving to the crowd, and I just felt something take me out.” 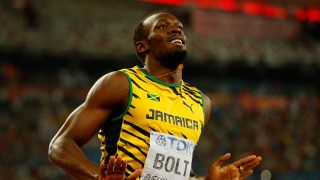 Bolt: I may retire after Rio Olympics


Bolt has won all five of his races in his career at Beijing’s Bird’s Nest, three at the 2008 Olympics and two so far at these World Championships.
“The rumor I’m trying to start right now is that [silver medalist] Justin Gatlin paid him off,” Bolt said in a press conference.

“I want my money back,” Gatlin responded. “He didn’t complete the job.”

“As much as he could,” Bolt said. “But I checked to make sure he was OK because I think he got the worst of it because he was off balance. He was falling backwards. I’m not sure if he hit his head. But I’m just happy that he’s OK. I’m fine.”

Video: Usain Bolt and Justin Gatlin’s first race together from 2005

This could have been so much worse. Thankfully no major damage #shouldvegonetospecsavers pic.twitter.com/pYosWngePu

Very scary to watch. I Can't watch again. Unless someone can photoshop Justin Gatlin's face on the camera man https://t.co/NTGkAe8xXS