Michael Phelps discussed his swimming career, from energetic child to 15-year-old Olympian to 22 Olympic medals and his recent troubles, on “Undeniable” with Joe Buck on Wednesday night.

Among the stories told was of one of Phelps’ famous goal sheets. Phelps is known for setting goals (usually times he’d like to hit for each of his events) but generally not sharing them outside of his inner circle, namely coach Bob Bowman.

On the show, an image was shown of a Phelps goal sheet from age 11 or 12. On one side of the sheet, not shown, Phelps had written a goal of winning a gold medal but scratched it out because it was too unrealistic, Buck said.

Then Phelps turned the sheet over and revised it to say he “would like to make the Olympics” followed by time targets for three events.

“That’s about right,” Phelps said on “Undeniable.” “It’s really the whole entire thing that still, like the motto I live by today, it’s dream, plan, reach. You come up with a dream, you figure out how you’re going to get there and you go for it. What’s the worst that happens? You fail? Great. Get up and do it again. It’s that easy.” 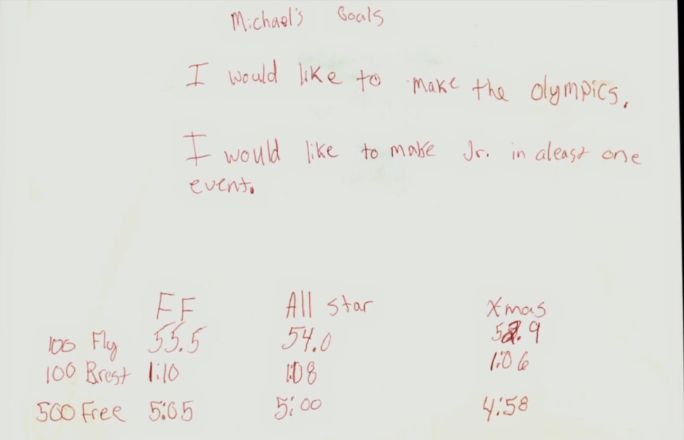