The Rio Olympic women’s 200m first-round heats have been moved from an evening session to a morning session, which would aid Allyson Felix‘s potential 200m-400m double plan.

With the updated schedule, Felix could race the 200m and 400m at the Olympics without having to run multiple times in the same session. She is the reigning Olympic 200m champion and World 400m champion.

“We would like to thank the IOC, IAAF and USATF for their successful efforts to change the Olympic schedule to allow for a women’s 200-400 double,” Felix’s coach, Bobby Kersee, said in a statement. “Being able to pursue the double has been a goal of Allyson’s since she entered the sport. Without the advocacy of USATF and the willingness of the IAAF to entertain the possibility, this could not have happened.”

“USATF is extremely pleased the IAAF and IOC have changed the 2016 Olympic timetable to allow for a 200-400 double in women’s competition,” USATF CEO Max Siegel said in a statement. “We worked closely with Allyson Felix and her team to advocate for this change, which will help elevate the visibility of the sport as a whole on the Olympic stage.”

A little history on the situation:

Kersee said in December that she would race the 200m and the 400m at the U.S. Olympic track and field trials in July regardless of if the Olympic schedule would be changed to make the 200m-400m double more feasible in Rio, according to Reuters.

“The Olympic trials schedule is fine, and I am working with USA Track & Field (USATF) on the Olympic schedule,” Kersee said in December, according to the report. “Adjusting the schedule in my opinion does not hurt anybody.”

USATF and the IAAF, track and field’s international governing body, talked about a possible schedule change and a formal request would be filed, a spokeswoman said in December, according to Reuters.

“I guess I wouldn’t say I’m confident because I have no idea really,” Felix said of a potential schedule change in October. “I feel like it could definitely go either way. I think I’m more just hoping for the opportunity.”

International Olympic Committee president Thomas Bach said before the World Championships in August that the Rio track and field schedule could be changed under “a special case.”

In July, Felix said that Kersee would be “voicing his opinion” by “talking to whoever he needs to talk to” hoping to change the Rio Olympic track and field schedule.

If the Olympic schedule wasn’t changed, would Felix still consider trying to race both the 200m and 400m?

“Right now I don’t see why I would do them both,” Felix said in October. “I feel like if the schedule’s not going to change, I would take time to focus on one or the other, but that’s something I’d have to think about.

“The 200’s my favorite, clearly, but that’s not to say that I wouldn’t run the 400. I haven’t ruled anything out if the schedule’s not changed.”

In 1996, the original Olympic schedule called for the men’s 200m semifinals and 400m final on the same day. Michael Johnson lobbied for a change.

The March 1996 revised schedule allowed Johnson a full day of rest between the 400m final and the start of the 200m rounds. Johnson, in golden shoes, went on to become the first man to sweep the 200m and 400m at an Olympics.

The women’s 200m-400m double gold has also been done at the Olympics. American Valerie Brisco-Hooks swept them at Los Angeles 1984, and France’s Marie-Jose Perec in 1996.

Brisco-Hooks and Perec, like Johnson, also had one day off between the 400m and 200m in their Olympic schedules. 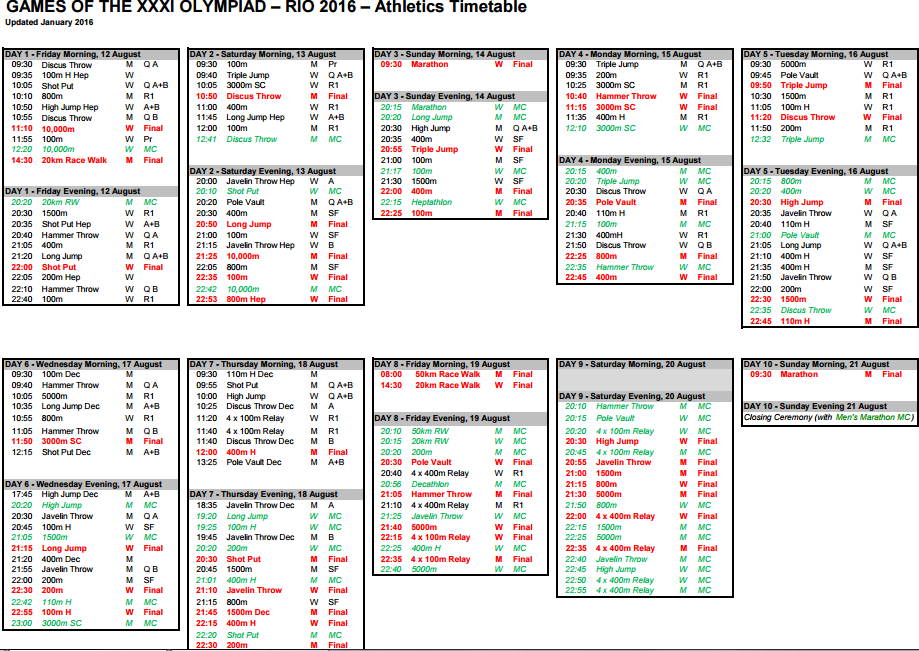