Louganis is most noteworthy, for there was a petition to put the four-time Olympic diving champion on the iconic cereal box following his 2015 documentary, “Back on Board.”

In the film, Louganis said that he wasn’t as celebrated as other 1980s Olympic champions.

“Never got a Wheaties box,” Louganis said in the film. “Their response was that I didn’t fit their wholesome demographics or whatever. Basically, being gay, or being rumored that I was gay.”

Louganis, who swept the platform and springboard titles in 1984 and 1988, retired after the Seoul Olympics and came out publicly as gay and HIV positive in the mid-1990s.

Below are images of the boxes to come out in May along with comments from each athlete, via General Mills: 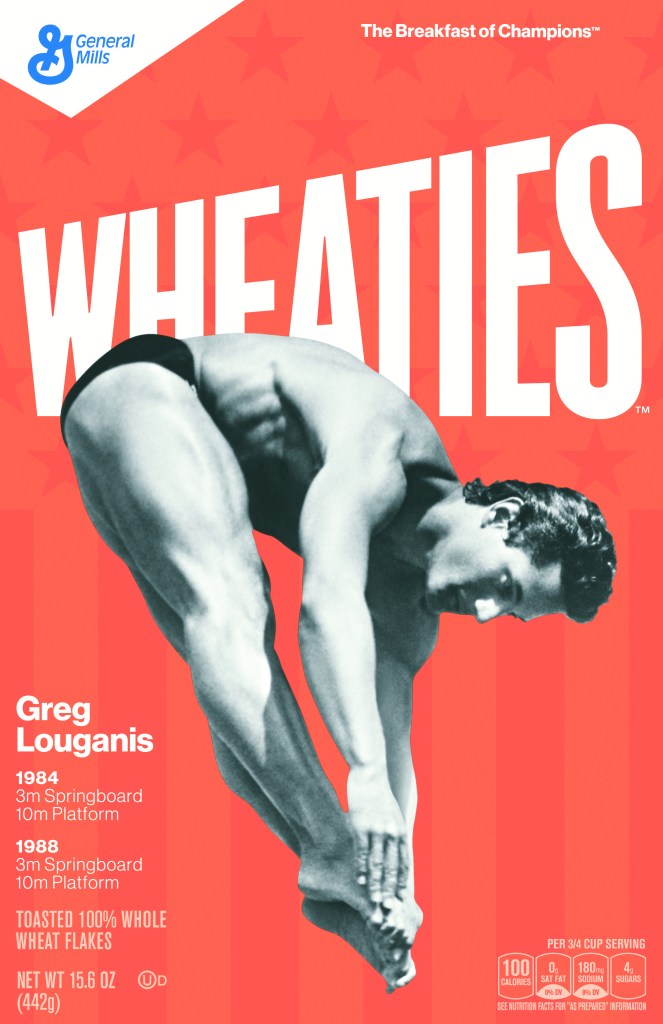 Louganis: “It’s so iconic, everybody looks at the Wheaties box and it’s such an honor. I can’t wait to see Janet’s and Edwin’s boxes too. I’m excited for them as much as myself. What great company to be in. Edwin’s always been a hero to me. It’s such an honor to be in this group.” 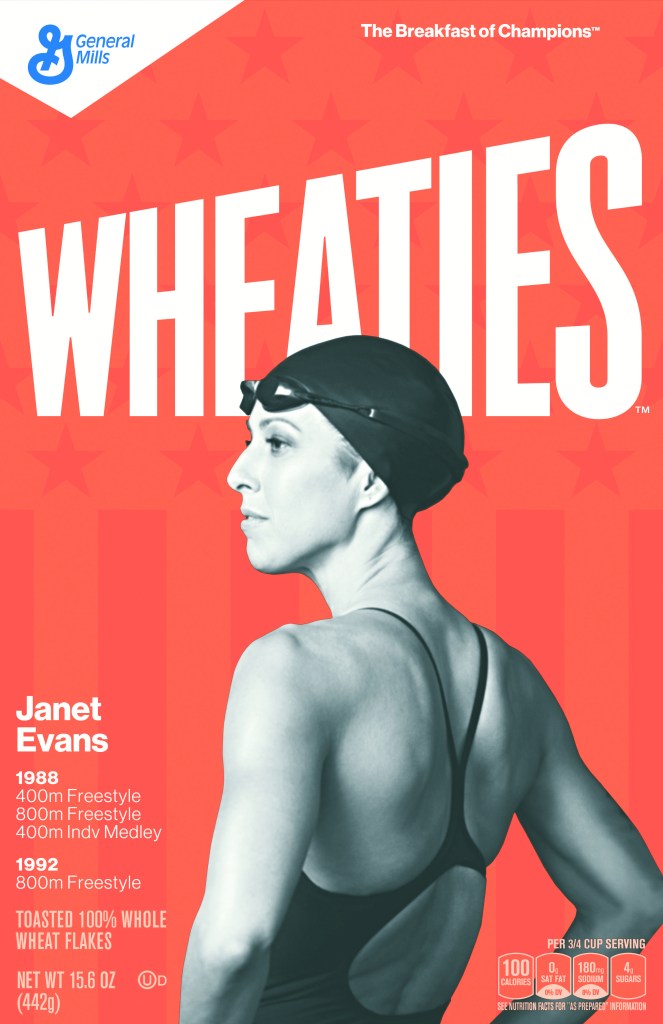 Evans: “I think getting the honor now actually means more. I think when you’re competing and you’re young, you kind of just take it for granted that of course if you win a gold medal you might have the incredible honor of being on a Wheaties box. To even be listed with the incredible athletes that have been on the Wheaties box, and to be a part of this great legacy … for me to be on a Wheaties box with these incredible legends that have already graced the front of your boxes. It’s truly an honor and I honestly can’t think of anything that makes me more excited. I’m really honored.” 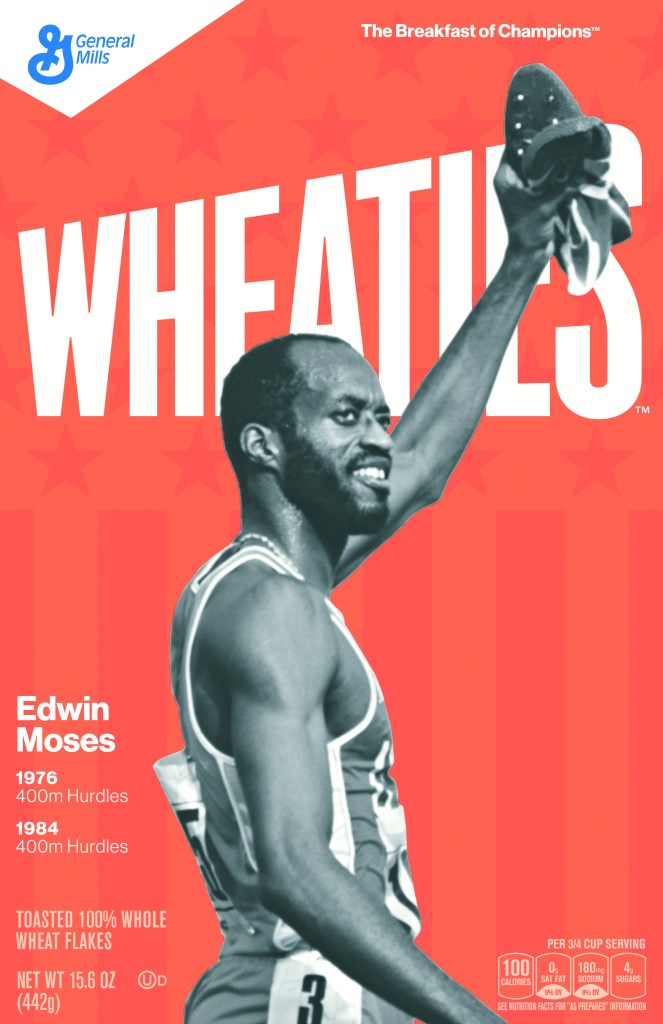 Moses: “I was very impressed, because I know it’s a very prestigious honor to be on the box of Wheaties. Several icons in track and field, and people that I know, have been on the box – starting with Bruce Jenner in 1976 – so it’s quite an honor to be included among that subset of athletes.”

One year ago, Birk Irving was the last man to make the four-man U.S. Olympic ski halfpipe team. Since, he continued to climb the ranks in arguably the nation’s strongest discipline across skiing and snowboarding.

A tribute was held to 2015 World champion Kyle Smaine, a U.S. halfpipe skier who died in an avalanche in Japan last Sunday.

“We’re all skiing the best we have because we’re all skiing with Kyle in our hearts,” Irving said, according to U.S. Ski and Snowboard. “We’re skiing for him, and we know he’s looking down on us. We miss you Kyle. We love you. Thank you for keeping us safe in the pipe today.”

The next major event is the world championships in Georgia (the country, not the state) in early March. Irving was third at the last worlds in 2021, then fifth at the Olympics last February.

The U.S. has been the strongest nation in men’s ski halfpipe since it debuted at the Olympics in 2014. Wise won the first two gold medals. Alex Ferreira won silver and bronze at the last two Olympics. Aaron Blunck is a world champion and X Games champion.

In snowboarding events at Mammoth, Americans Julia Marino and Lyon Farrell earned slopestyle wins by posting the top qualification scores. The finals were canceled due to wind.

“New Year, New Blessing,” she posted on social media with husband Maicel Uibo, the 2019 World Championships silver medalist in the decathlon for Estonia. “We can’t wait to meet our little bundle of joy.”

Also last year, Miller-Uibo said she planned to drop the 400m and focus on the 200m going into the 2024 Paris Games rather than possibly bid to become the first woman to win the same individual Olympic running event three times.

She has plenty of experience in the 200m, making her world championships debut in that event in 2013 and placing fourth. She earned 200m bronze at the 2017 Worlds, was the world’s fastest woman in the event in 2019 and petitioned for a Tokyo Olympic schedule change to make a 200m-400m double easier. The petition was unsuccessful.

She did both races anyway, finishing last in the 200m final, 1.7 seconds behind the penultimate finisher on the same day of the 400m first round.

Notable moms to win individual Olympic sprint titles include American Wilma Rudolph, who swept the 100m, 200m and 4x100m at the 1960 Rome Olympics two years after having daughter Yolanda.

And Dutchwoman Fanny Blankers-Koen, who won four gold medals at the 1948 London Olympics, when the mother of two also held world records in the high jump and long jump, two events in which she didn’t compete at those Games.