ANCIENT OLYMPIA, Greece (AP) — The flame for South America’s first Olympics was kindled Thursday at the birthplace of the ancient games in Greece, heralding the start of a 15-week journey that will culminate with the Aug.5 Opening Ceremony in Rio de Janeiro.

International Olympic Committee leaders and Brazilian organizers attending the flame-lighting in the ruins of Ancient Olympia voiced strong confidence that Brazil will stage successful Games, despite a political crisis which forced Brazilian President Dilma Rousseff to cancel a scheduled appearance at the ceremony.

Rousseff faces possible impeachment before the Games over alleged accounting tricks in managing the federal budget. The host country is also beset by corruption scandals, a deep recession and the Zika virus outbreak, while Games-related problems include spending cuts, slow ticket sales and delays in some venues.

Brazilian Sports Minister Ricardo Leyser said the country’s woes will have “no impact” on the Games.

“It will be a big party and people will forget the other problems and just focus on the Games,” he told reporters. “So I don’t think it’s really a problem for the Games.”

Carlos Nuzman, head of the Rio organizing committee, said the Olympics will help unite Brazilians and pledged that the host city “is ready to deliver history.”

“We are incredibly proud to have come so far, sailing through some of the most challenging waters the Olympic movement has seen,” Nuzman said, adding that the Olympic flame “brings a message that can and will unite our dear Brazil.”

The IOC insists that the Rio Games will be a success, maintaining that preparations are already at an operational phase.

“These Olympic Games will be a message of hope in troubled times — and indeed the flame will carry this message into all corners of Brazil and, indeed, all the world,” he said. “Despite the difficulties that Brazil is facing today, the flame is a timeless reminder that we are all part of the same humanity.”

Bach said 98 percent of all infrastructure is ready and the test events are going well, adding that he is “very confident” on the Games’ success.

The flame was lit outside the 7th Century B.C. Temple of Hera in Olympia by Greek actress Katerina Lehou, in a long pleated dress impersonating a pagan high priestess. After a mock prayer to the ancient Greek gods, she used a concave mirror to focus the sun’s rays on her torch, and the ceremony continued in the ancient stadium — which was used at the 2004 Athens Games as the shot put venue.

The flame-lighting ceremony, a key part of the Olympic pageantry, dates to one of the more awkward moments of the modern Games, the 1936 Berlin Olympics conducted by Nazi Germany.

The first torchbearer, Greek world gymnastics champion Eleftherios Petrounias, took delivery of the flame and handed it to Brazilian former volleyball great Giovane Gavio at the beginning of a relay involving hundreds.

The relay will traverse Greece for six days until the April 27 handover to Brazilian officials in Athens, at the refurbished ancient stadium where the first modern Games were held in 1896.

“This is the beginning of … the last stretch of the organization,” Bach said. “We’re really looking forward to the moment when this flame is finally burning in the Olympic cauldron in Rio de Janeiro.”

In a nod to the global refugee crisis, the Greek leg will include a stop at a camp in Athens that is home to 1,500 refugees and migrants trapped in Greece — one of whom will participate in the relay — while a young Syrian boy from another camp will accompany the torchbearer in a small town just north of Olympia.

For the first time at the Rio Games, the IOC will allow a group of five to 10 refugee athletes to participate, marching behind the Olympic flag at the opening ceremony. IOC officials say there are 42 potential participants, and the final selection will be made in June.

“We thought that this is the responsibility of the International Olympic Committee to send a signal of solidarity with refugees who are fleeing their homes from war and from violence,” Bach said. “We wanted to give (them) a home in the Olympic village. We wanted to give them a flag, with the Olympic flag … an anthem to identify with — the Olympic anthem.”

After a brief stopover in Switzerland, the flame will start its travels through Brazil on May 3, starting in the capital of Brasilia. Organizers say it will reach most of the vast country’s 200 million population, covering 20,000 kilometers (12,000 miles) by road and 16,000 kilometers (10,000 miles) by air to reach hundreds of cities and towns in a giant effort involving 12,000 torchbearers.

In a departure from customary practice, Rio will have two stadiums: the Maracana for the Opening and Closing Ceremonies and soccer, and the Olympic Stadium across town, which will be used for track and field. After the first night in the Maracana, the flame will depart for an undisclosed downtown location for the rest of the Games.

MORE: Rio Olympic flame will live downtown — not in stadium

Images via AP and Getty: 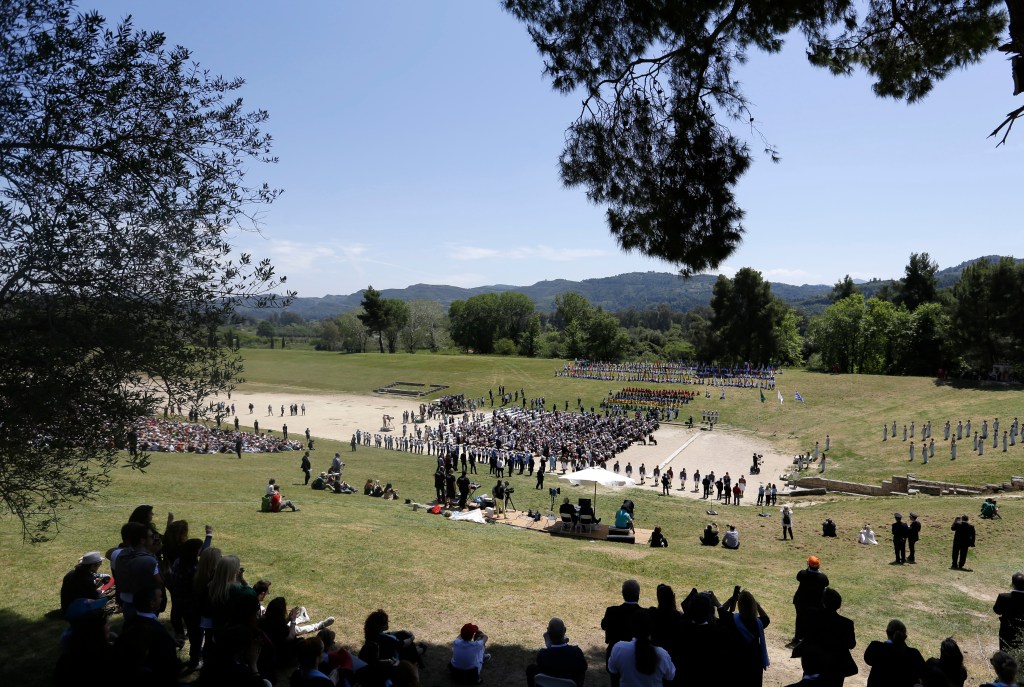 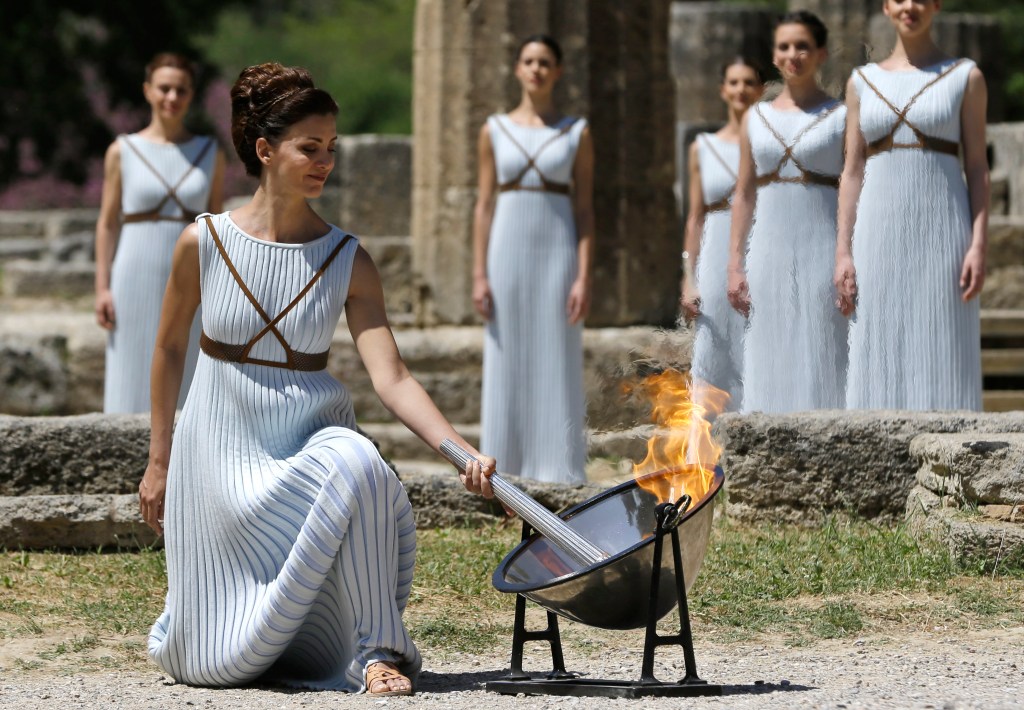 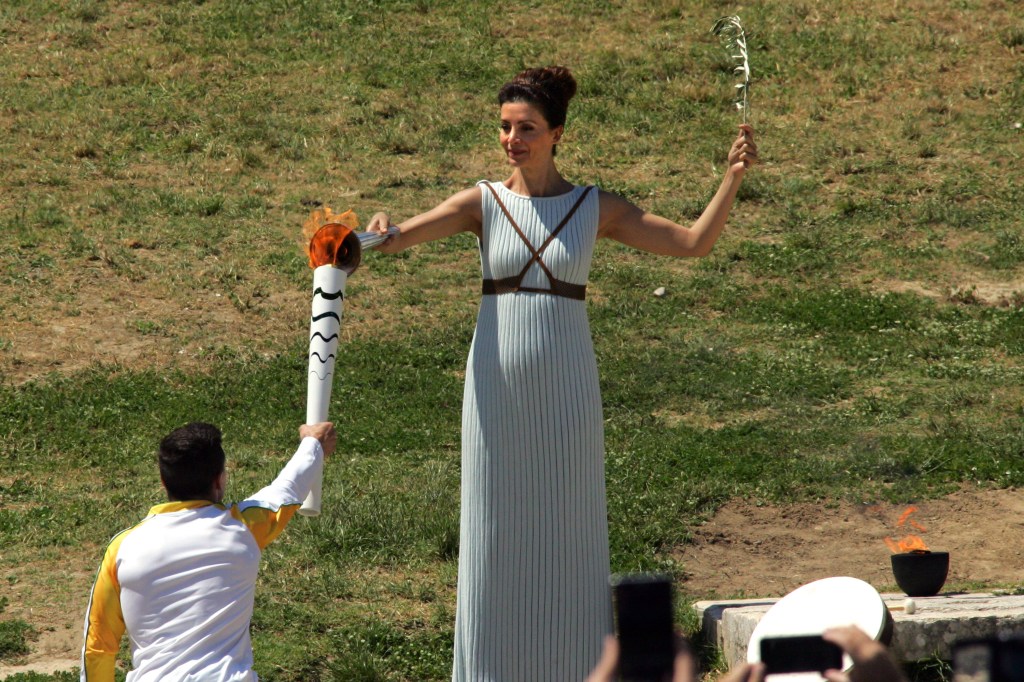 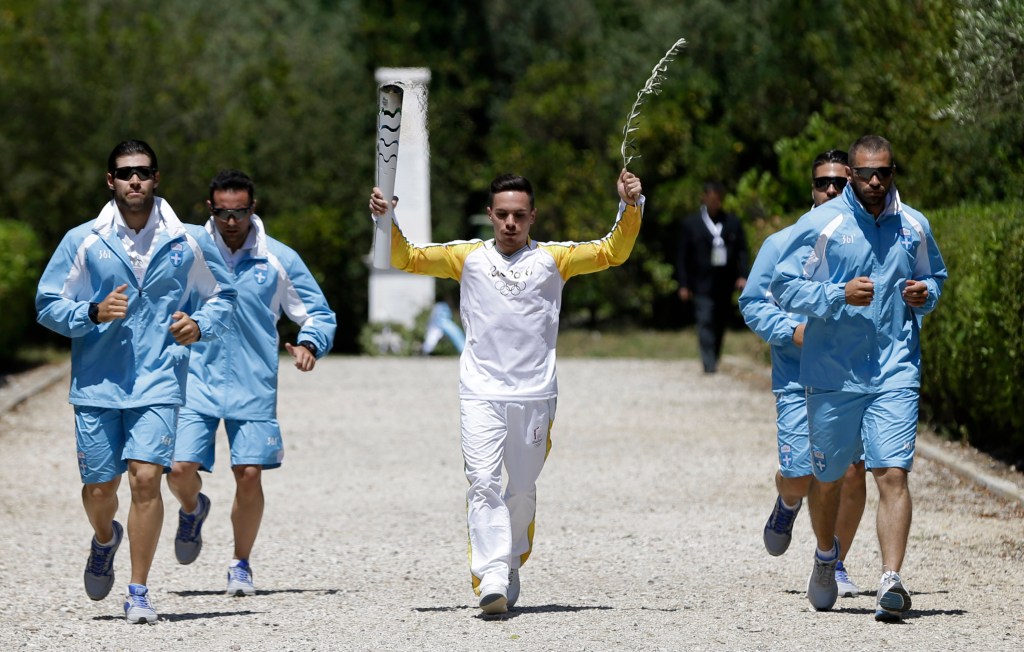 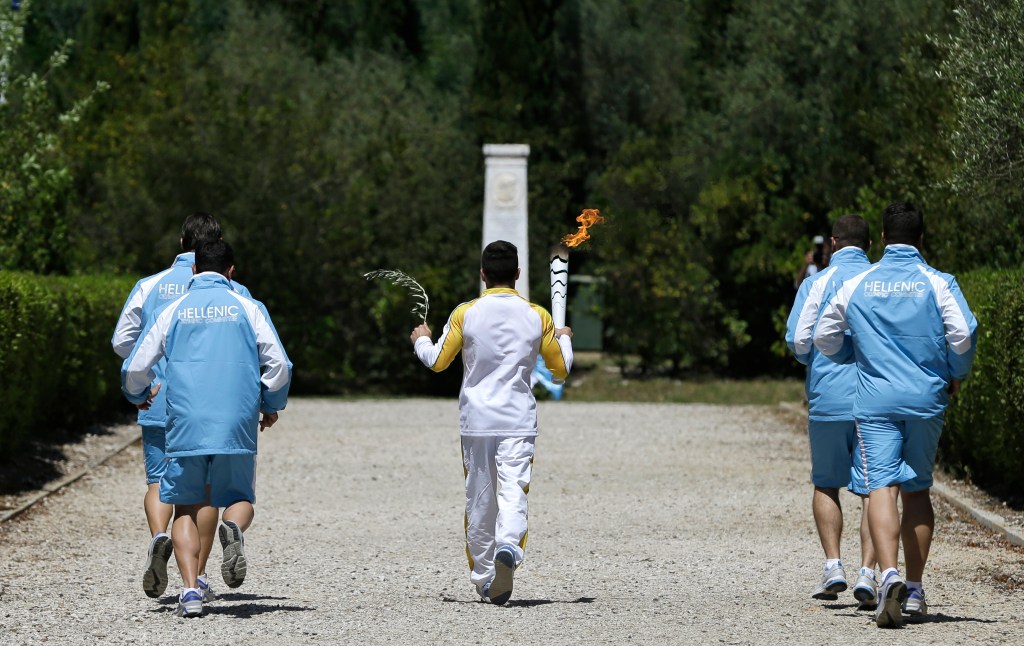 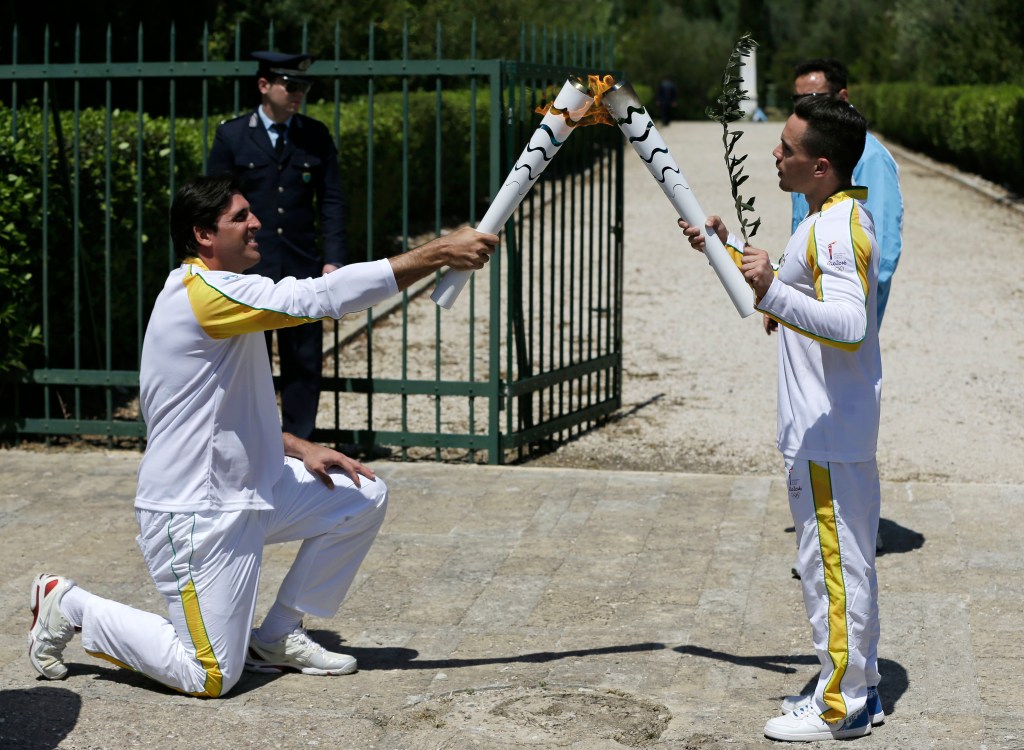 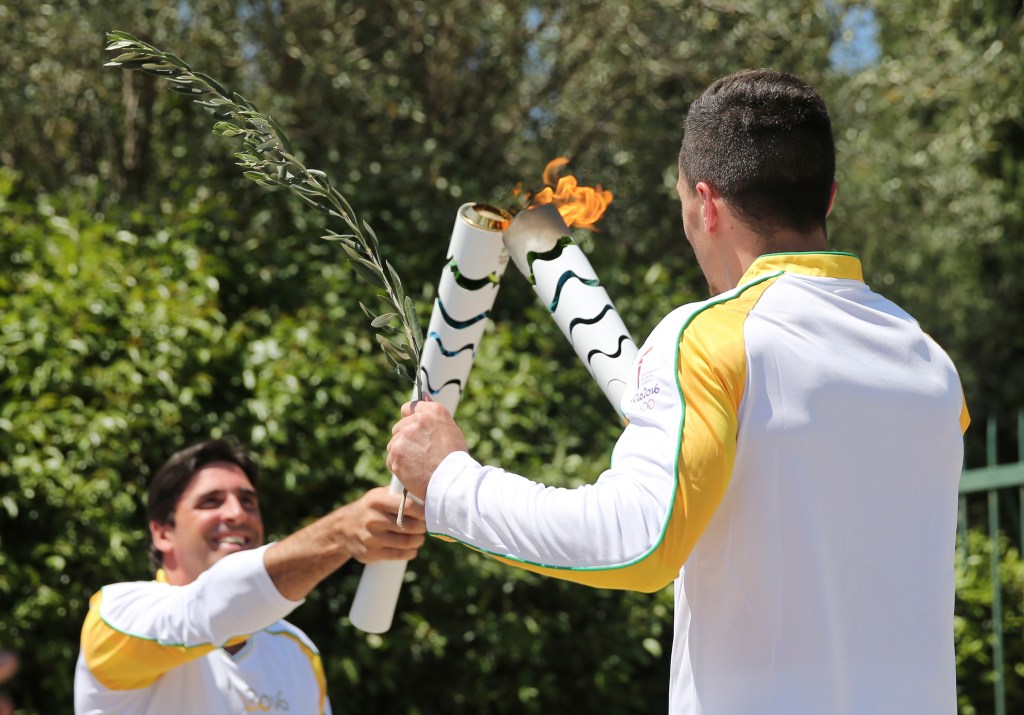 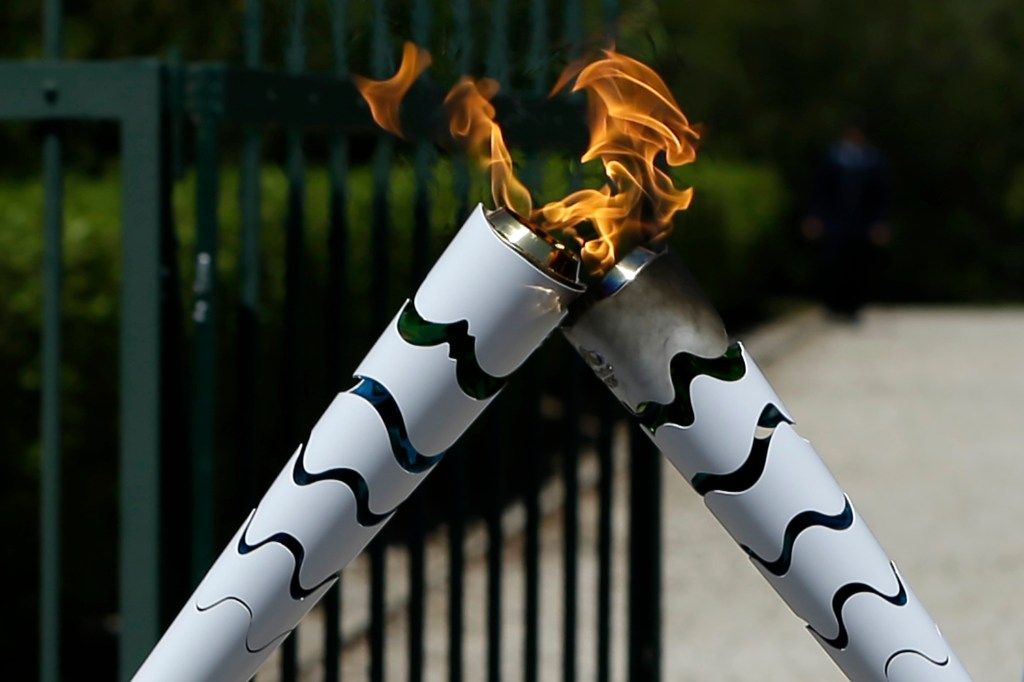 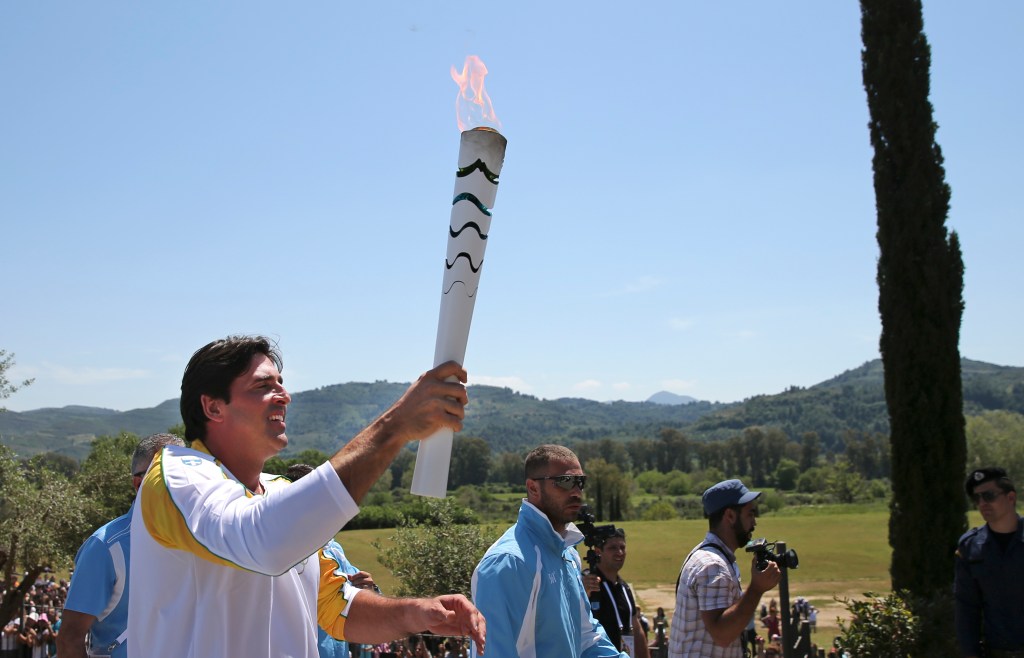 Shiffrin won the first of back-to-back slaloms in Spindleruv Mlyn, Czech Republic, site of her World Cup debut in 2011 at age 15, for her 11th victory in 22 starts this season.

She prevailed by six tenths of a second over German Lena Duerr combining times from two runs. Then she celebrated with an uncharacteristic shoulder shimmy before “Simply the Best” by Tina Turner began playing over loudspeakers in the finish area.

It’s not the first time that song has been played after a Shiffrin victory this season.

“Eighty-five is like the icing on the cake, and if I get 86, I don’t know if it’s going to be tomorrow,” Shiffrin said, according to the International Ski Federation. “I think these other athletes have a chance to win it so we’re going to have to find out tomorrow.”

Shiffrin, having her best season since her record 17-win campaign in 2018-19, is now one victory shy of the Alpine World Cup record held by Swede Ingemar Stenmark, who won 86 times between slalom and giant slalom in the 1970s and ’80s.

Stenmark has held the record since January 1982.

Shiffrin is on her second winning streak this season and has won nine of her last 14 races dating to Dec. 18. Last Tuesday, she won a giant slalom in Kronplatz, Italy, to break her tie with Lindsey Vonn for the women’s Alpine World Cup wins record. On Wednesday, she won another GS In Kronplatz.

She leads the standings for the World Cup overall title, the biggest annual prize in ski racing, by more than 600 points through 27 of 39 scheduled races. At this rate, she could clinch her fifth overall title before March’s World Cup Finals.

She is currently tied with Vonn for the second-most women’s overall titles behind Austrian Annemarie Moser-Pröll, who won five in the 1970s.

Mikaela Shiffrin, who last year won her fourth World Cup overall title, is the headliner. Shiffrin, who began the season with 74 career World Cup race victories, is now up to 84, passing Lindsey Vonn for the female record and now two behind Ingemar Stenmark‘s overall record.