Allyson Felix‘s return to her trademark event, the 200m, ended in defeat at a Diamond League finals meet in Zurich on Thursday.

Felix was beaten by Jamaican Elaine Thompson in a matchup of the last two Olympic 200m champions and Felix’s first race since the Rio Games.

Thompson won in 21.85 seconds (video here), the fastest time in Diamond League history, her second victory in as many races since sweeping the Olympic 100m and 200m titles in Rio.

The Netherlands’ Dafne Schippers was second, .01 behind, one year after beating Thompson by .03 in the world championships 200m.

Felix took third in 22.02 seconds on Thursday. She was nearly even with Thompson coming around the curve, but the Jamaican opened up a short lead at the start of the final straight. Felix was unable to close the gap.

Felix improved mightily on her Olympic Trials 200m time of 22.54 seconds, when she was slowed by a toe injury and missed the Olympic team by .01.

Of course, Felix won the 400m at the Olympic Trials and went on to take silver in Rio behind diving Bahamian Shaunae Miller.

In other events, South African Olympic champion Caster Semenya won the 800m in 1:56.44, leading the final lap and holding off silver medalist Francine Niyonsaba of Burundi by .32. Semenya’s time in Rio, a national record, was 1:55.28.

U.S. Olympic 3000m steeplechase silver medalist Evan Jager led for much of the 5000m but was caught on the final lap and finished third. Ethiopian Hagos Gebrhiwet won in 13:14.82, following up his Olympic 5000m silver medal. Two-time Olympic champion Mo Farah of Great Britain was not in Thursday’s race.

The Diamond League season concludes in Brussels on Sept. 9. 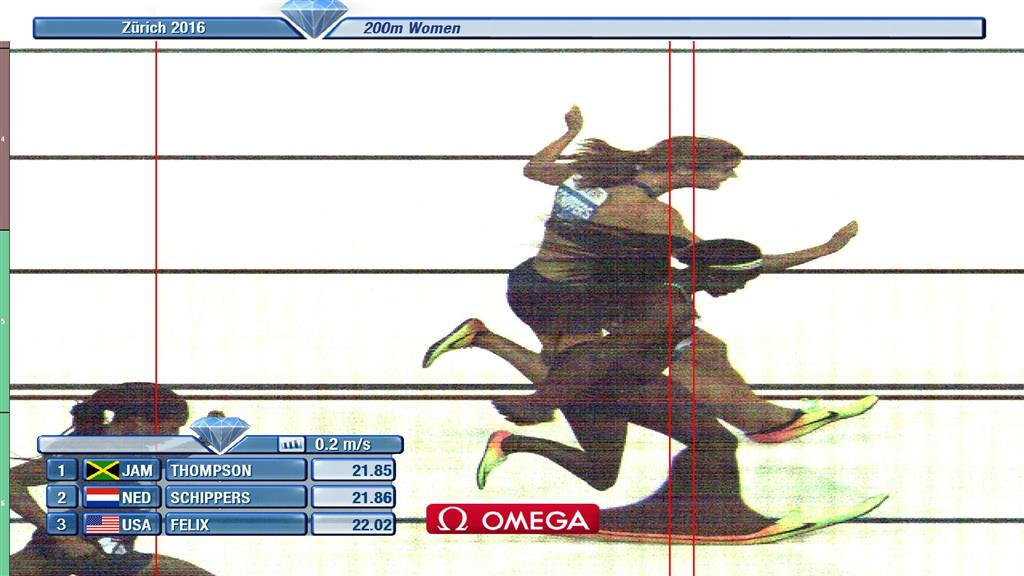