It’s not uncommon for Olympic champions to receive marriage proposals from fans.

But somebody went above and beyond for Simone Biles, sending her a ring in addition to professing their love for the gymnast in writing, according to her Snapchat.

Biles snapped the picture just after posting another image indicating she was autographing more than 200 leotards after flying from New York City earlier in the day.

She’s currently on a break from gymnastics but is expected to resume training by next winter and make a run for the 2020 Tokyo Olympics. 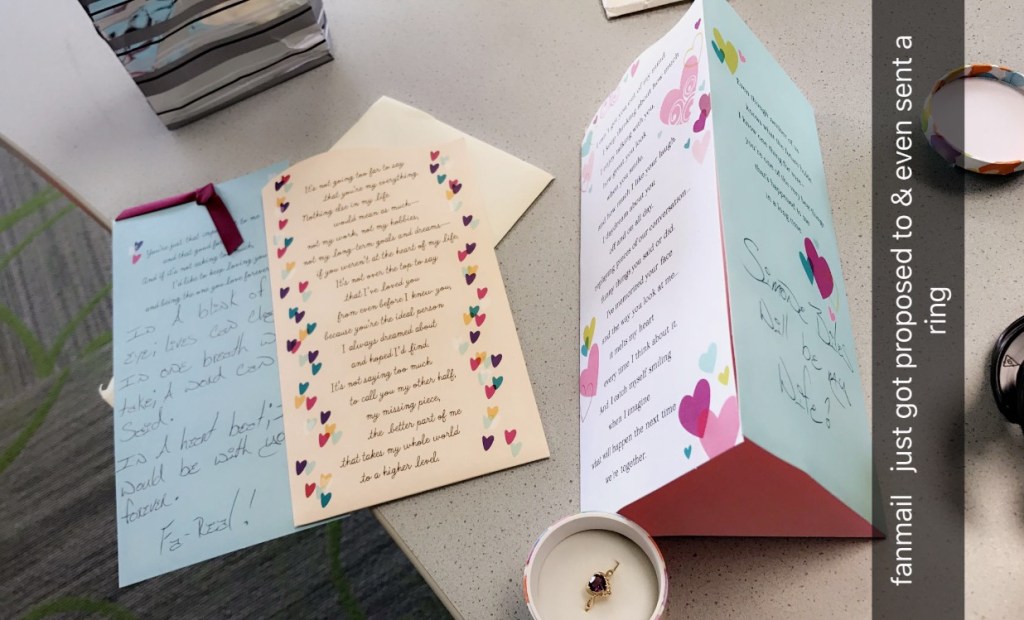 Shiffrin won the first of back-to-back slaloms in Spindleruv Mlyn, Czech Republic, site of her World Cup debut in 2011 at age 15, for her 11th victory in 22 starts this season.

She prevailed by six tenths of a second over German Lena Duerr combining times from two runs. Then she celebrated with an uncharacteristic shoulder shimmy before “Simply the Best” by Tina Turner began playing over loudspeakers in the finish area.

It’s not the first time that song has been played after a Shiffrin victory this season.

“I knew it would take some risk,” she said. “There’s a chance I don’t finish at all.”

Shiffrin, having her best season since her record 17-win campaign in 2018-19, is now one victory shy of the Alpine World Cup record held by Swede Ingemar Stenmark, who won 86 times between slalom and giant slalom in the 1970s and ’80s.

Stenmark has held the record since January 1982.

Shiffrin is on her second winning streak this season and has won nine of her last 14 races dating to Dec. 18. Last Tuesday, she won a giant slalom in Kronplatz, Italy, to break her tie with Lindsey Vonn for the women’s Alpine World Cup wins record. On Wednesday, she won another GS In Kronplatz.

She leads the standings for the World Cup overall title, the biggest annual prize in ski racing, by more than 600 points through 27 of 39 scheduled races. At this rate, she could clinch her fifth overall title before March’s World Cup Finals.

She is currently tied with Vonn for the second-most women’s overall titles behind Austrian Annemarie Moser-Pröll, who won five in the 1970s.

The 24-year-old Sabalenka, who is from Belarus, was appearing in her first major final.

She improved to 11-0 in 2023, and the only set she has dropped all season was the opener on Saturday against Wimbledon champion Rybakina.

But Sabalenka turned things around with an aggressive style that resulted in 51 winners, 20 more than her opponent. She used 17 aces to overcome seven double-faults. And she managed to break the big-serving Rybakina three times, the last coming for a 4-3 lead in the third set that she never relinquished.

Still, Sabalenka needed to work for the championship while serving in what would be the last game, double-faulting on her initial match point and requiring three more to close things out.

When Rybakina sent a forehand long to cap the final after nearly 2 1/2 hours, Sabalenka dropped to her back on the court and stayed down for a bit, covering her face as her eyes welled with tears.

Sabalenka is a powerful player whose most glowing strength was also her most glaring shortfall: her serve. Long capable of hammering aces, she also had a well-known problem with double-faulting, leading the tour in that category last year with nearly 400, including more than 20 apiece in some matches.

After much prodding from her team, she finally agreed to undergo an overhaul of her serving mechanics last August. That, along with a commitment to trying to stay calm in the most high-pressure moments, is really paying off now.

Sabalenka was 0-3 in Grand Slam semifinals until eliminating Magda Linette in Melbourne. Now Sabalenka has done one better and will rise to No. 2 in the rankings.

As seagulls were squawking loudly while flying overhead at Rod Laver Arena, Rybakina and Sabalenka traded booming serves. Rybakina’s fastest arrived at 121 mph, Sabalenka’s at 119 mph. They traded zooming groundstrokes from the baseline, often untouchable, resulting in winner after winner.

The key statistic, ultimately, was this: Sabalenka accumulated 13 break points, Rybakina seven. And although Sabalenka converted just a trio of them, that was enough, and the constant pressure she managed to apply during Rybakina’s service games had to take a toll.

Sabalenka had been broken just six times in 55 service games through the course of these two weeks, an average of once per match. It took Rybakina fewer than 10 minutes of action and all of two receiving games to get the measure of things and lead 2-1, helped by getting back one serve that arrived at 117 mph (189 kph).

A few games later, Sabalenka returned the favor, also putting her racket on one of Rybakina’s offerings at that same speed. Then, when Sabalenka grooved a down-the-line backhand passing winner to grab her first break and pull even at 4-all, she looked at her coach and fitness coach in the stands, raised a fist and shouted.

In the next game, though, Sabalenka gave that right back, double-faulting twice — including on break point — to give Rybakina a 5-4 edge. This time, Sabalenka again turned toward her entourage, but with a sigh and an eye roll and arms extended, as if to say, “Can you believe it?”

Soon after, Rybakina held at love to own that set.

Sabalenka changed the momentum right from the get-go in the second set. Aggressively attacking, she broke to go up 3-1, held for 4-1 and eventually served it out, fittingly, with an ace — on a second serve, no less.

Sabalenka acknowledged ahead of time that she expected to be nervous. Which makes perfect sense: This was the most important match of her career to date.

And if those jitters were evident ever-so-briefly early — she double-faulted on the evening’s very first point — and appeared to be resurfacing as the end neared, Sabalenka controlled them well enough to finish the job.