Michael Phelps was beaten by a great white shark in a Shark Week “race.”

“I don’t like taking silver medals, but I’ll take one to a great white,” said Phelps, who complained about swimming in 50-degree water in a thin wetsuit but still called it “a dream come true.” “We don’t swim in this, so it basically just shocks our entire body. It’s almost like [the shark is] a bullet.”

The 23-time Olympic champion was not in the race water at the same time as a shark on “Phelps vs. Shark: Great Gold vs. Great White,” which aired on Discovery Channel on Sunday night.

Instead, experts determined the speeds and movements of sharks for hypothetical races. Then, Phelps dove into open water off South Africa alone with a monofin and swam to a buoy earlier this year.

Experts determined a great white could cover 100 meters in 36.1 seconds, which is much faster than Brazilian Cesar Cielo‘s 100m freestyle world record of 46.91.

They said a great white could reach up to 26 miles per hour at its fastest, meaning it could close the final 10 meters of a race in one second.

Early in the show in the Bahamas, Phelps outswam a hypothetical reef shark but was beaten by a hammerhead’s late surge in a 50-meter race. 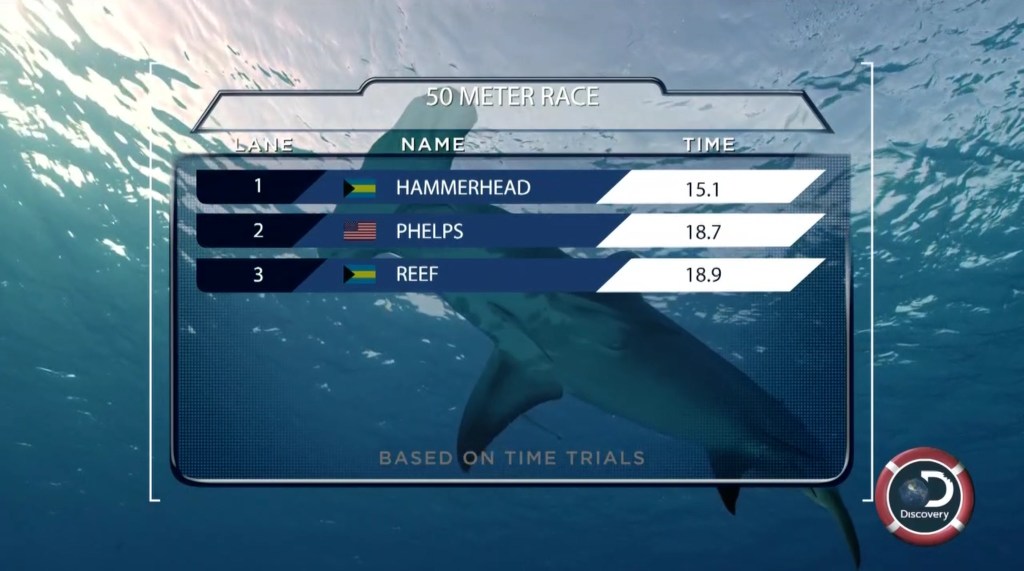 The show used Phelps’ world record 100m butterfly swim from the 2009 World Championships for reference, saying he reached about 5.5 miles per hour at the end of the race.

A shark was super-imposed into a lane in that worlds race and easily outdistanced Phelps in the last 25 meters.

Phelps will star on the final night of Shark Week in “Shark School with Michael Phelps” next Sunday at 8 ET.

“Michael Phelps joins Doc Gruber and Tristan Guttridge of the Bimini Shark Lab to get a crash course on everything ‘shark,'” according to Discovery Channel. “They’ll dispel the myths and common misconceptions, teach him how to safely dive with sharks – including how to stay calm when a hammerhead swims two feet above his face – and will get Michael Phelps up close and personal with the incredible power of a great white.”

MORE: Phelps says he doesn’t have itch to return to unretire