Usain Bolt shared the extent of his injury — a torn hamstring requiring three months of rehab — after people questioned if he was really hurt at the world championships Saturday, according to tweets from his account since deleted.

“I don’t usually release my medical report to the public but sadly I have sat and listened to people questioning if I was really injured,” was posted on Bolt’s account. “I have never been one to cheat my fans in anyway (sic) & my entire desire at the championship was run one last time for my fans.”

Bolt pulled up with the leg injury running anchor on the 4x100m relay at worlds and then tumbled onto the track not yet halfway to the finish line.

A wheelchair was brought out, but Bolt got up and walked across the finish line, aided by his teammates.

Since, unconfirmed reports have surfaced that Bolt could play in a Manchester United exhibition game, but the seriousness of his injury revealed Thursday could put an end to that, at least for now.

The injury has not sidelined Bolt completely. He was able to go bowling earlier this week.

MORE: Usain Bolt explains why he will not unretire 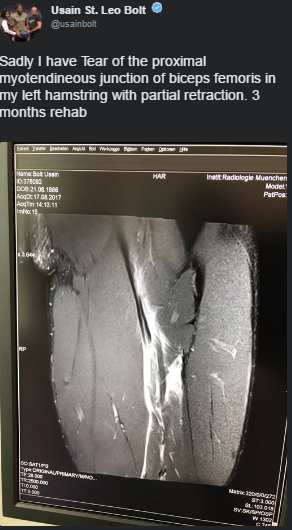 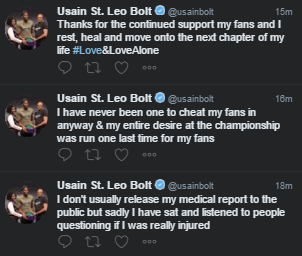