Norway’s Alexander Kristoff rounded the final turn toward home with a slight lead, churning for the finish, but Sagan sprinted up his right side to edge the Norwegian on the final extension at the finish. 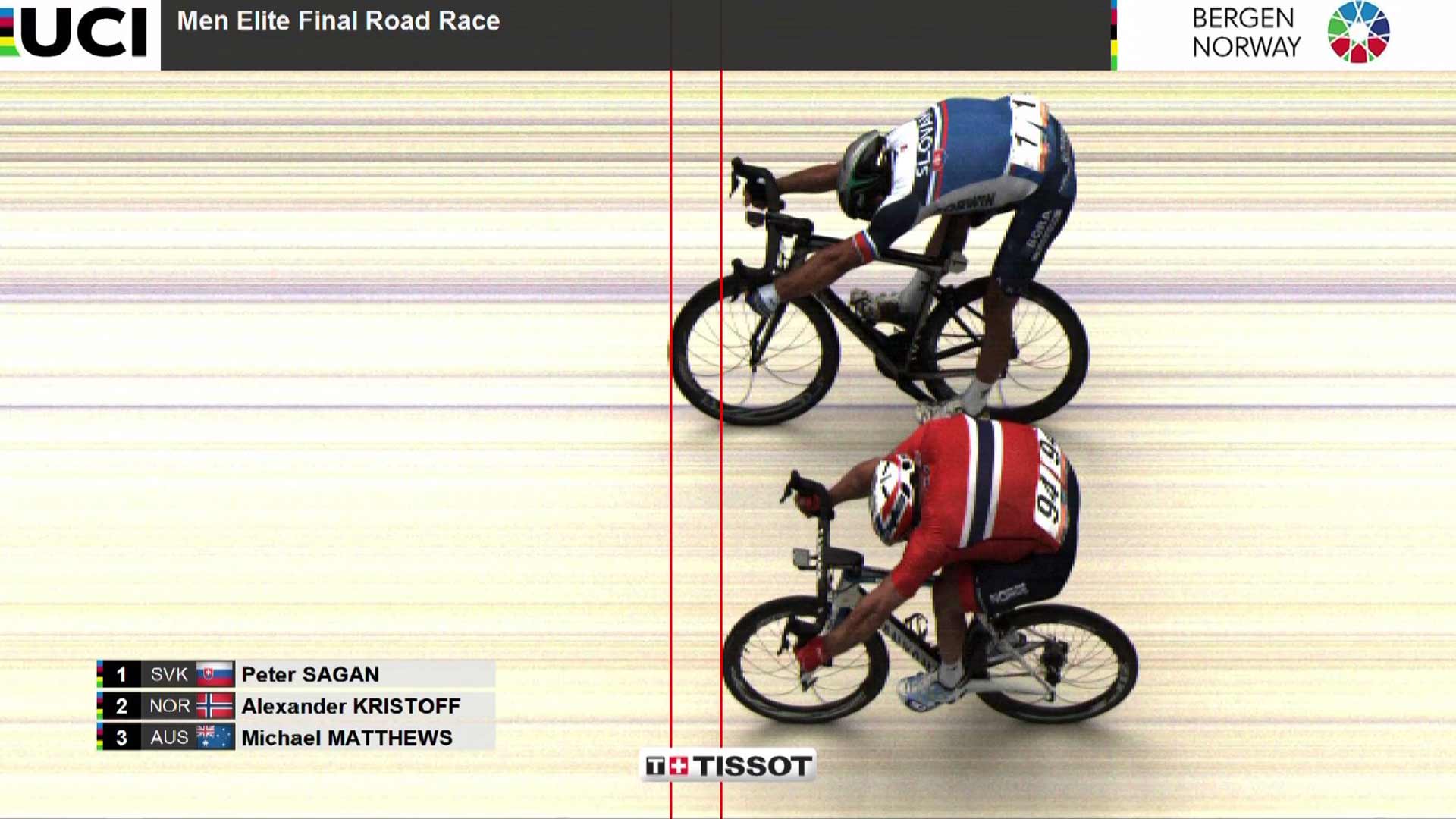 An estimated 100,000 spectators watched the riders repeatedly try to establish a lead pack throughout the race which ended with 12 loops through the streets of Bergen, but no one could find a way to make a clean break. Sagan would bide his time in the peloton for much of the race.

Adding even more drama to an already thrilling road race, with 3km left France’s Julian Alaphilippe began pulling away from a bunched peloton, which kicked off the final lap en masse. With Alaphilippe appearing in control, the cameras shooting from the lead pack motorcycle lost power.

Television commentators and everyone watching on TV or online were left in the dark, waiting to catch a glimpse of the lead riders. Tension mounted while viewers were stuck looking at a road void of cyclists near one of the final turns toward the finish.

“Where are the riders at the front of this race!” lamented NBC’s Paul Sherwen. 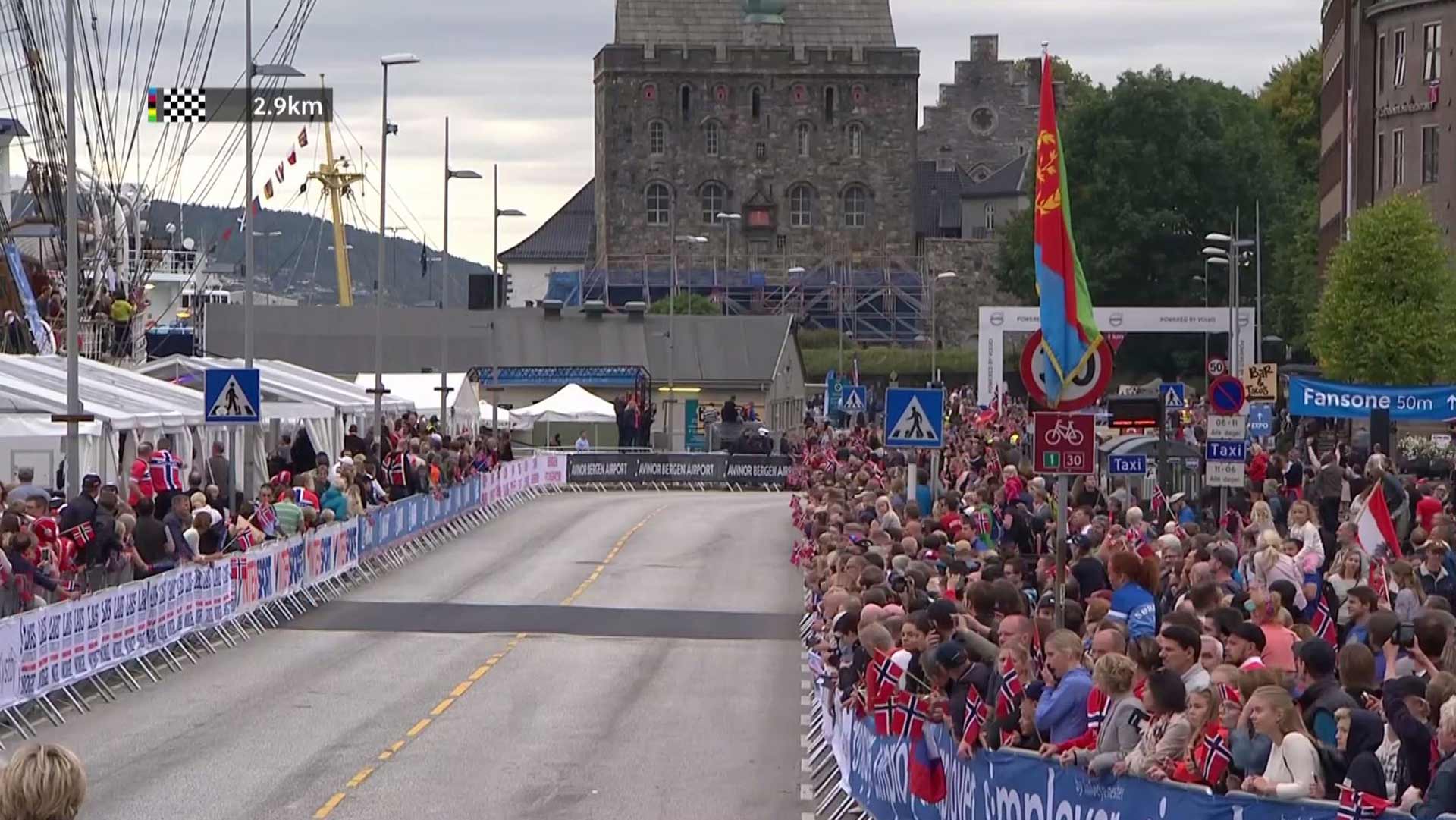 When the riders finally came into view, Alaphilippe was no longer in the lead, and 25-30 riders were jockeying for position as they rushed to the finish, but it was Sagan who would cross first in the end.

“For the last five kilometers, I said to myself, it’s already done. But it’s unbelievable. This is something special. You saw in the climb, we were in pieces. And at the finish, it all happened in seconds,” Sagan said after the race according to The Guardian.

Italian cyclist Michele Scarponi was killed after being hit by a van while training near his home in Filottrano back in April. The loss was one that was felt across the entirety of the cycling world.

Michael Matthews of Australia finished the race in third.

When you think there is a Rock Band 🤘 in town but actually it's just for @petosagan @Kristoff87 and @blingmatthews #Bergen2017 pic.twitter.com/eXF7VLhAhy

Norway’s Lucas Braathen, the world’s top male slalom skier this season, is doubtful to compete in the world championships slalom on Feb. 19 after appendix surgery on Tuesday.

“It’s been a tough couple of days fighting after surprisingly finding out about quite an intense infection on my appendix,” Braathen, a 22-year-old soccer convert with a Brazilian mom, posted on social media. “I’ve been through surgery and I’m blessed that it went successfully.”

The Norway Alpine skiing team doctor said Braathen’s recovery will take a few weeks, but there is a small possibility he can make it back for the world championships slalom, which is on the final day of the two-week competition.

Braathen has two slalom wins and one giant slalom win this World Cup season. He will miss Saturday’s slalom in Chamonix, France, the last race before worlds. Countryman Henrik Kristoffersen and Swiss Daniel Yule can overtake him atop the World Cup slalom standings in Chamonix.

Braathen entered last year’s Olympics as the World Cup slalom leader and skied out in the first run at the Games.

Hassan, a 30-year-old Dutchwoman, said she will return to the track after the race, but how the London Marathon goes will play into whether she bids for the Olympic marathon in 2024.

Exhausted by her Olympic feat, Hassan reportedly went at least seven months after the Tokyo Games between training in track spikes. She finished fourth in the 10,000m and sixth in the 5000m at last July’s world championships in Eugene, Oregon.

“I really needed a break after the Tokyo Olympics,” Hassan said at worlds. “I was mentally crashed. I didn’t even care about running.”