The Court of Arbitration for Sport ruling was set to reinstate seven Russian medals from the 2014 Sochi Olympics, including gold in men’s skeleton and men’s 50km cross-country skiing.

“This does not mean that these 28 athletes are declared innocent, but in their case, due to insufficient evidence, the appeals are upheld, the sanctions annulled and their individual results achieved in Sochi are reinstated,” CAS secretary general Matthieu Reeb said in PyeongChang.

The IOC said it had taken note of the CAS decision “with satisfaction on the one hand and disappointment on the other,” adding the decision “may have a serious impact on the future fight against doping.”

The 28 who had their bans lifted could now seek late entry into the PyeongChang Olympics, but the IOC said “not being sanctioned does not automatically confer the privilege of an invitation.”

Russian Deputy Prime Minister Vitaly Mutko said the government would back further legal action to allow the athletes in Thursday’s decisions to compete in PyeongChang.

“If the IOC does not accept them, then we will support them in cases which could be filed at CAS and other legal instances,” Mutko said in televised comments.

Eleven more Russians were ruled to have been guilty of doping but had lifetime bans imposed by an IOC disciplinary panel two months ago cut to a ban only from the PyeongChang Games, which open next week.

“Vigorous actions in defending rights in court are justified and can be effective and should continue,” said Dmitry Peskov, the spokesman for Russian President Vladimir Putin. “We’re glad for our athletes.”

In the urgent verdicts announced Thursday, the two CAS judging panels who heard 39 appeal cases last week in Geneva — and took testimony from Russian whistleblower Grigory Rodchenkov — did not give detailed reasons.

“In 28 cases, the evidence collected was found to be insufficient to establish that an anti-doping rule violation (ADRV) was committed by the athletes concerned,” the sports court said in a statement.

CAS said it “unanimously found that the evidence put forward by the IOC in relation to this matter did not have the same weight in each individual case.”

The 11 whose appeals were rejected came from men’s bobsled, women’s cross-country skiing and women’s hockey.

Still, the CAS rulings will be seen as a victory for Russia, which has long denied it ran a state-backed doping program.

“It’s a big victory for them and I’m relieved that justice has finally been done,” Philippe Baertsch, a lawyer for the athletes, told The Associated Press. “This confirms what they’ve been saying since Day 1, namely that they are and they’ve always been clean athletes, and that they were wrongly sanctioned without any evidence.”

The IOC has already invited 169 Russians to the PyeongChang Olympics to compete under a neutral flag, but may now be forced to allow in athletes it deems dopers, eight days before the games begin.

“We do hope that the IOC will grant them the right to participate in PyeongChang,” Baertsch said in a telephone interview. “I think that the least the IOC could do is allow them to participate, so we will request that they are allowed to participate, and depending on the answer of the IOC, we will take the measures that are necessary.”

It wasn’t immediately clear how many of the 28 Russians would now seek to compete. Some have already retired from competitive sports.

“(Rodchenkov’s) truth has been verified by forensic evidence, other whistleblowers, and, more recently, recovery of the Moscow lab’s secret database, showing thousands of dirty tests that were covered up,” Walden said in a statement.

“This panel’s unfortunate decision provides a very small measure of punishment for some athletes but a complete ‘get out of jail free card’ for most. Thus, the CAS decision only emboldens cheaters, makes it harder for clean athletes to win, and provides yet another ill-gotten gain for the corrupt Russian doping system generally, and Putin specifically.”

Baertsch said there had been “numerous inconsistencies” in Rodchenkov’s evidence presented to CAS.

Russia won’t win back some medals, such as in the men’s four-man bobsled, where two crew members were disqualified and two reinstated. Both of the gold medal-winning two-man bobsled crew remain banned.

“We were hoping for justice, and it has prevailed,” said Elena Nikitina, who won a bronze medal in skeleton in Sochi ahead of American Katie Uhlaender. “It’s a matter of my life, what I do, and when you’re accused like that it’s very unpleasant and everything falls apart for you.

“We’re going to hope that we still make it to these Olympic Games.”

Uhlaender, who was in line to be upgraded to Sochi bronze, said she was “heartbroken” by Thursday’s news.

“The integrity of sport is on the line, and I’m looking to the leaders of a movement to do something to save it,” Uhlaender said.

The IOC last year banned 43 Russians for doping offenses at the Sochi Olympics, ruling they had been part of a scheme to dope.

Rodchenkov, the director of the laboratory which handled samples for the Sochi Games, said he gave cocktails of banned steroids to athletes and swapped tainted samples for clean urine on orders from Russian state sports officials. 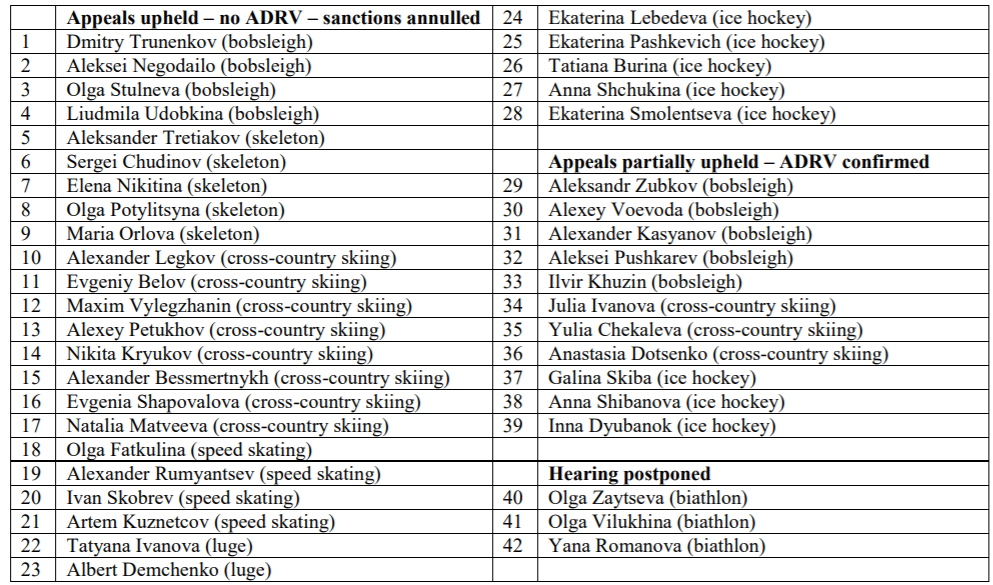 One year ago, Ilia Malinin came to the U.S. Championships as, largely, a 17-year-old unknown. He finished second to Nathan Chen in 2022 and was left off the three-man Olympic team due to his inexperience, a committee decision that lit a fire in him.

After the biggest year of change in U.S. figure skating in three decades, Malinin came to this week’s nationals in San Jose, California, as the headliner across all disciplines.

Though he fell on his quadruple Axel and doubled two other planned quads in Sunday’s free skate (the most ambitious program in history), he succeeded the absent Chen as national champion.

“This wasn’t the skate that I wanted,” said Malinin, who was bidding to become the second man to land six quads in one program after Chen. The Virginia chalked up the flaws at least partially to putting more recent practice time into his short program, which he skated clean on Friday after errors in previous competitions.

Brown, a 28-year-old competing for the first time since placing sixth at the Olympics, became the oldest male singles skater to finish in the top three at nationals since Jeremy Abbott won the last of his four titles in 2014. As usual, he didn’t attempt a quad but had the highest artistic score by 9.41 points.

“I’m not saying it’s super old, but I can’t train the way I used to,” Brown said after Friday’s short program. “What Ilia is doing and the way he is pushing the sport is outstanding and incredible to watch. I cannot keep up.”

Andrew Torgashev took bronze, winning the free skate with one quad and all clean jumps. Torgashev, who competed at nationals for the first time since placing fifth in 2020 at age 18, will likely round out the three-man world team.

Japan’s Shoma Uno will likely be the favorite at worlds. He won last year’s world title, when Malinin admittedly cracked under pressure in the free skate after a fourth-place short program and ended up ninth.

Malinin’s next step is to grab another label that Chen long held: best in the world. To do that, he must be better than he was on Sunday.

“You always learn from your experiences, and there’s always still the rest of the season to come,” he said. “I just have to be prepared and prepare a little bit extra so that doesn’t happen again.”

Canadian snowboarder Mark McMorris broke his tie with American Jamie Anderson for the most Winter X Games medals across all sites, earning his 22nd medal, a slopestyle gold, in Aspen, Colorado.

On the final run of Sunday’s contest, McMorris overtook Norway’s Marcus Kleveland with back-to-back 1620s on the last two jumps. McMorris’ last three Aspen slopestyle titles were all won on his final run (2019, 2022).

“It’s something I never thought would ever come to me as a kid from Saskatchewan,” McMorris, 29, said on the broadcast. “Everything’s just been a bonus since I became a pro snowboarder.”

In a format introduced three years ago, athletes were ranked on overall impression of their best run over the course of a jam session rather than scoring individual runs.

“It just keeps getting crazier because I keep getting older,” he said. “People just keep pushing the limits, pushing the limits. Last night was such a downer, almost bums me out, like, dude, do I still have it? … To have one of those miracle wins where you do it on the last run and someone makes you push yourself, those are the best feelings.”

McMorris won slopestyle bronze medals at each of the last three Olympics and reportedly said last February that he was planning to compete through the 2026 Milan-Cortina Winter Games.

Canadian Max Parrot, the 2022 Olympic slopestyle champion, is taking this season off from competition.

“I wouldn’t still be out here if I didn’t think I had a chance,” Wise, 32 and now a five-time X Games Aspen champ, said on the broadcast. “I’m not going to be the guy who just keeps playing the game until everybody just begs me to stop.”