When Maddie Rooney finally arrived home in Minnesota last week, it looks like she had mail waiting from U.S. Defense Secretary Jim Mattis.

The note posted on Rooney’s Instagram Story on Monday and dated Feb. 28, six days after Rooney stopped 29 of 31 Canadian shots (and another four of six in a shootout) in the Olympic gold-medal game:

“Dear Madam Secretary Maddie,
I want to add my congratulations to you and your teammates for your magnificent performance in the gold medal game. You proved yourself in a hard-fought competition and I salute you — one secretary of defense to another!
We are all very proud of you.
Sincerely, Jim Mattis.”

Mattis clearly referred to a viral moment that occurred after the U.S.’ 3-2 win. Somebody changed Rooney’s position on her Wikipedia page from “goaltender” to “Secretary of Defense.” It was changed back.

This is all reminiscent of 2014, when Tim Howard made 16 saves against Belgium in the World Cup and was inserted as the U.S. Defense Secretary on Wikipedia.

The man whom Howard replaced, Chuck Hagel, later called Howard to congratulate him.

“He told Howard that with some training, he could someday become the real Secretary of Defense,” a U.S. Department of Defense press release said. 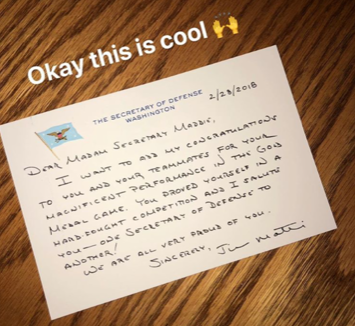