LONDON (AP) — Serena Williams avoided any early matchups against opponents with success to speak of at Wimbledon in a draw on Friday that could put her against No. 5 seed Elina Svitolina in the third round.

Williams is returning to the grass-court tournament for the first time since 2016 after missing it last year while pregnant. She gave birth to a daughter in September.

She is ranked outside the top 150, but the All England Club decided to seed her 25th based on past success, which includes collecting seven of her 23 Grand Slam singles trophies at Wimbledon. Williams’ first-round opponent when play begins on Monday will be 107th-ranked Arantxa Rus of the Netherlands, who has one career tour title.

Williams is competing for the first time since she pulled out of the French Open ahead of a fourth-round showdown against five-time major champion Maria Sharapova in early June, citing an injured chest muscle. That was Williams’ return to Grand Slam action after a 16-month absence.

Rus has only once been as far as Wimbledon’s third round, back in 2012. That was the last time she won a match at the All England Club. She was beaten in the first round of qualifying a year ago, as were both of the women Williams could meet in the second round, 136th-ranked qualifier Viktoriya Tomova of Bulgaria and 167th-ranked wild-card recipient Tereza Smitkova of the Czech Republic.

Svitolina has only once been as far as the fourth round.

Williams could face her older sister, five-time champion and 2017 runner-up Venus Williams, in the semifinals. The ninth-seeded Venus Williams opens against 62nd-ranked Johanna Larsson of Sweden, who is 0-7 at Wimbledon.

The Williams sisters are not in the doubles draw. They have won 14 Grand Slam titles as a pair, including six at Wimbledon.

In the top half of the women’s singles bracket, the quarterfinals could be French Open champion Simona Halep vs. two-time Wimbledon winner Petra Kvitova, and defending champ Garbine Muguruza vs. No. 6 Caroline Garcia. In the bottom half, No. 2 Wozniacki was drawn to face Svitolina, while 2017 U.S. Open champion Sloane Stephens could play No. 7 Karolina Pliskova.

The potential men’s quarterfinals in the top half are eight-time champion Roger Federer vs. 2017 U.S. Open runner-up Kevin Anderson, and 2014 U.S. Open champion Marin Cilic vs. No. 6 seed Grigor Dimitrov. In the bottom half of the bracket, it could be two-time Wimbledon winner Rafael Nadal vs. 2009 U.S. Open champion Juan Martin del Potro, and No. 4 Alexander Zverev vs. No. 7 Dominic Thiem.

Two-time champion Andy Murray will face 48th-ranked Benoit Paire in the first round. It’s a rematch of Murray’s fourth-round victory over the Frenchman at the All England Club in 2017.

That was Murray’s last win before he sat out nearly a year because of an injured hip that was surgically repaired in January.

He returned to action last week and so is ranked only 156th and unseeded at Wimbledon, which he won in 2013 and 2016.

Murray could face 26th-seeded Denis Shapovalov of Canada in the second round.

The top-seeded Federer’s opening opponent on Monday will be 57th-ranked Dusan Lajovic of Serbia. Their only previous meeting anywhere came in Wimbledon’s second round last year, when Federer won in straight sets en route to the title.

No. 2 seed Nadal, whose 17 Grand Slam titles trail only Federer’s 20 among men, faces 129th-ranked Dudi Sela of Israel on Tuesday. Nadal has won both of their previous matchups.

Men’s first-rounders to keep an eye on include Dimitrov against three-time major champion Stan Wawrinka, who is still working his way back into form after knee surgery; 12-time major champ Novak Djokovic against Australian Open quarterfinalist Tennys Sandgren of the U.S.; and No. 23 Richard Gasquet against Gael Monfils in a matchup of Frenchmen.

Two women who lost a Wimbledon final against Serena Williams will meet in the first round when former No. 1 and two-time major champion Angelique Kerber plays qualifier Vera Zvonareva. Kerber was the runner-up in 2016, Zvonereva in 2010.

Sharapova, the 2004 Wimbledon champion who is seeded 24th, could face 2017 French Open champion and 12th-seeded Jelena Ostapenko in the third round, and Kvitova in the fourth. 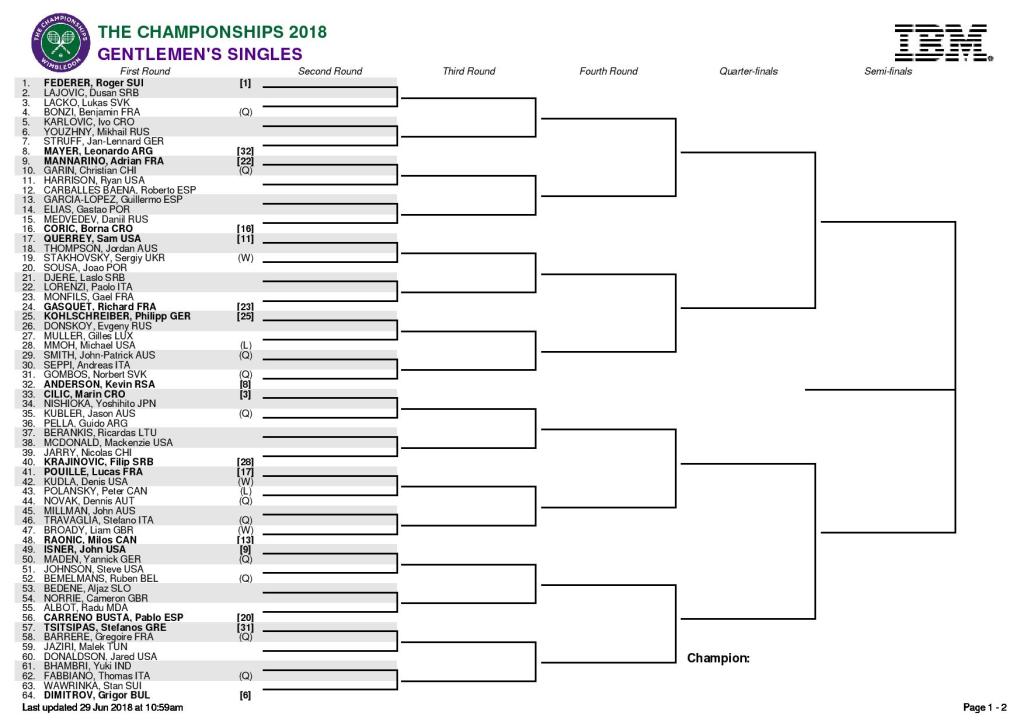 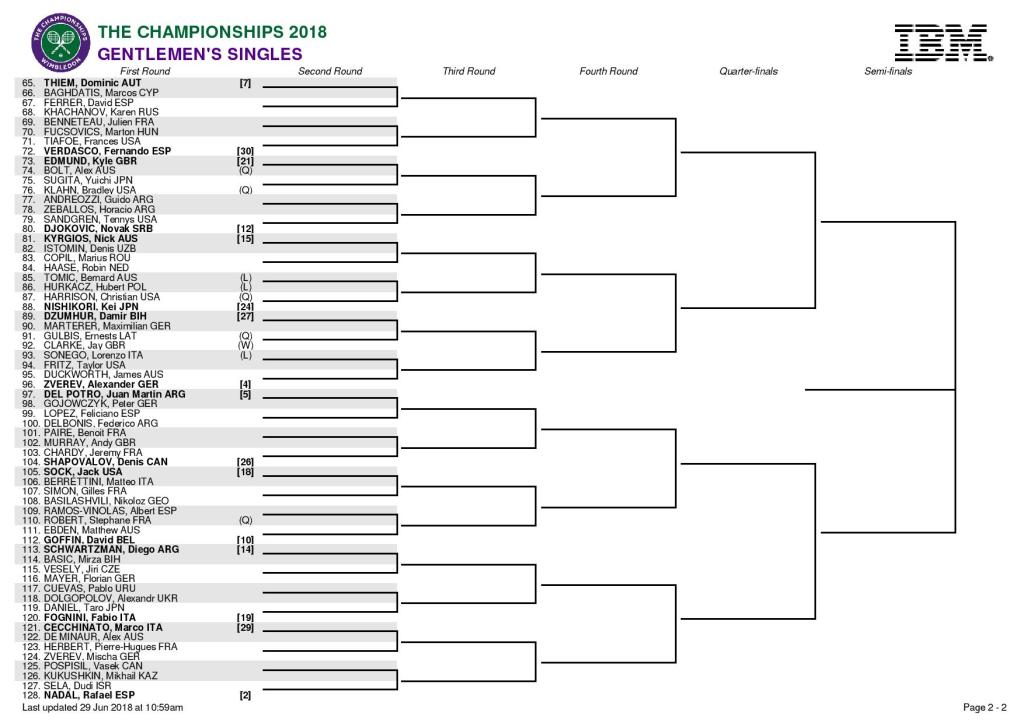 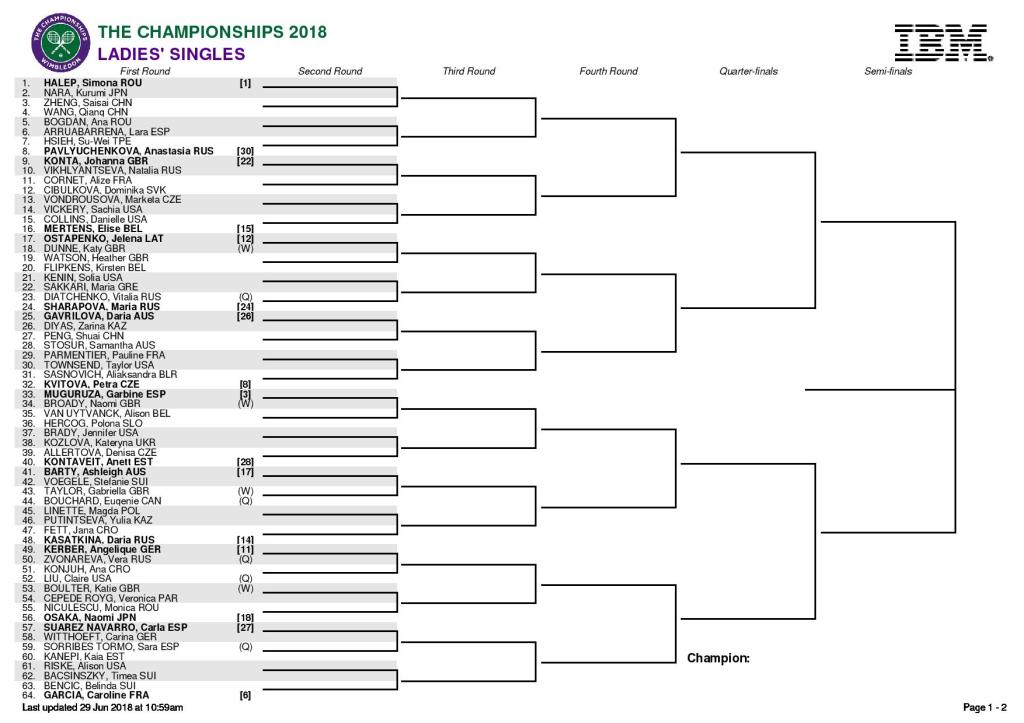 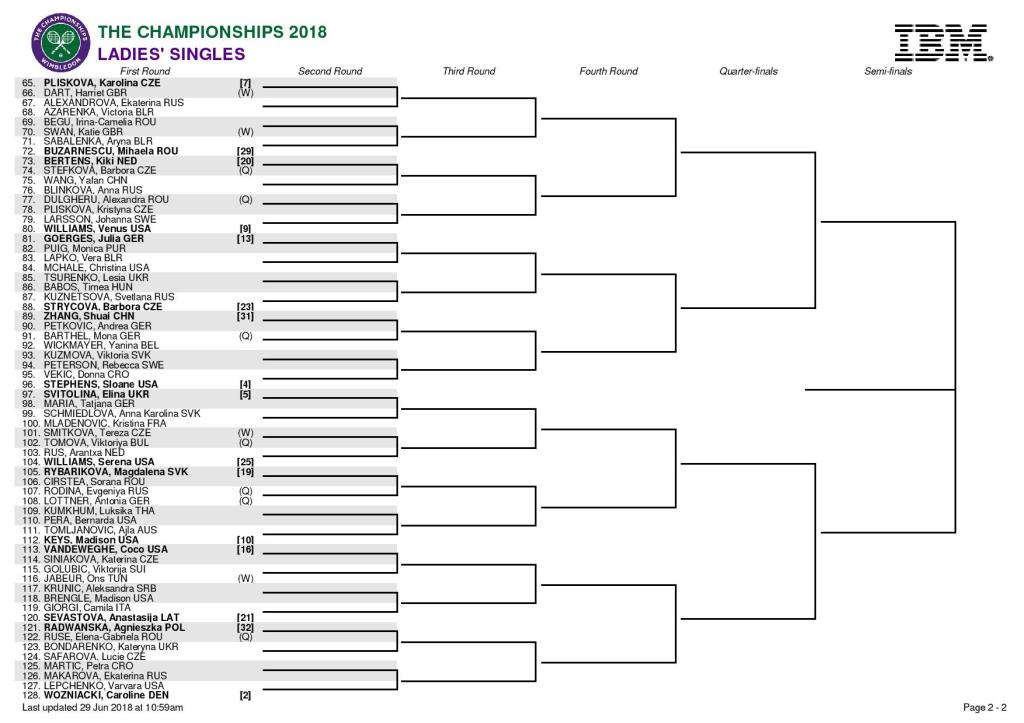