SARZEAU, France (AP) — Fernando Gaviria and Peter Sagan have turned the first four days of the Tour de France into an enthralling duel of rising star versus world champion.

And Tour newcomer Gaviria is winning so far.

Gaviria edged Sagan at the finish line to claim Stage 4 on Tuesday and take his second stage win in his first participation at cycling’s greatest race.

The 23-year-old Colombian had already bettered Sagan in a sprint to take the opening stage, amid rising expectations since his four stage victories at last year’s Giro d’Italia.

Sagan hit back by winning Stage 2 in an uphill sprint after Gaviria had fallen in a group pileup on the final corner.

Tuesday’s flat leg with its four-kilometer finish — the longest straightaway to conclude a leg on this Tour — was perfect terrain for the budding rivals to break the tie.

After Quick-Step hunted down the breakaway to set up Gaviria, he powered ahead of the pack with handlebars swinging and crossed just inches ahead of Sagan and Andre Greipel in a close third.

Sagan was closing fast and seemed to be on pace to overtake him just when Gaviria hit the line.

“He is faster than me,” said Sagan, the three-time defending world champion who excels in finishes on slight ascents.

“We will see. Maybe I will wait for some mistake (to beat him). And maybe we will see the next days on the climbs. Every stage is different, every sprint is different.”

Sagan held onto the green jersey as the top sprinter and will wear it for a record-breaking 89th time in stage five on Wednesday. German Erik Zabel wore it 88 times in the 1990s and 2000s as he won a record six points classifications, according to Gracenote.

Sagan will match Zabel’s record six titles if he’s in green in Paris on July 29.

Van Avermaet, the Rio Olympic road race champion, is expected to cede the race lead either in upcoming cobblestone or mountain stages. He and van Garderen will work for BMC team leader Richie Porte.

Porte, four-time Tour winner Chris Froome and the rest of the men expected to fight to top the podium in Paris all finished with the same time Tuesday.

“Tomorrow is going to be a hard stage. It is a mini-classic in the Tour,” said Van Avermaet.

The Tour works its way east before hitting the feared cobblestones of Stage 9 and then heading south and into the mountains.

Froome, who was cleared of doping allegations last week by the International Cycling Union, has been jeered by some skeptical fans since arriving in France. During Tuesday’s stage, several syringes were seen alongside the course route in apparent protest by anti-Froome spectators.

Froome is trying to join the select group of Jacques Anquetil, Eddy Merckx, Bernard Hinault and Miguel Indurain as the only riders to win the Tour five times. 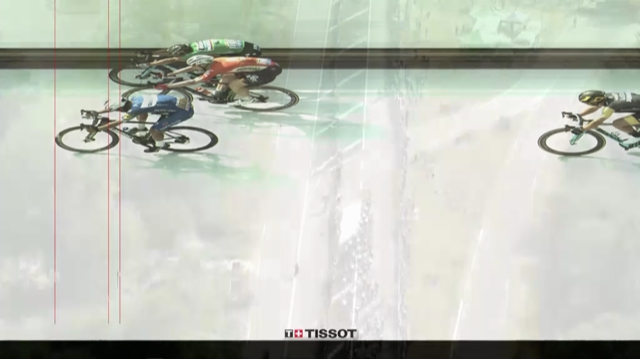