Who is currently the world’s fastest man? Christian Coleman staked another claim Friday, but just barely.

Coleman won a Diamond League 100m in Rabat in 9.98 seconds, edging countrymen Ronnie Baker by .006 and Noah Lyles by .01 into a slight headwind. The field included the world’s four fastest men since the Rio Olympics — Coleman, Baker, Lyles and Mike Rodgers (fourth in 10.01).

Nobody has been faster since Rio than Coleman’s 9.82 last year. At 2017 Worlds, he finished between Justin Gatlin and Usain Bolt. Then last winter, he ran faster than the 60m world record three times.

But Coleman was beaten by Baker at consecutive May meets before taking all of June off from competition with a hamstring injury. Rabat marked his first race in 44 days.

“This is a relief, finally getting a win under my belt,” Coleman said. “I look at this as kind of my re-season opening. It’s the first time I came into a meet with full confidence in my leg.”

Lyles, the U.S. 100m champion in Coleman’s absence, nearly came from behind to steal the win. It’s no surprise as Lyles is known for his 200m prowess. He would have won a 105-meter race on Thursday. 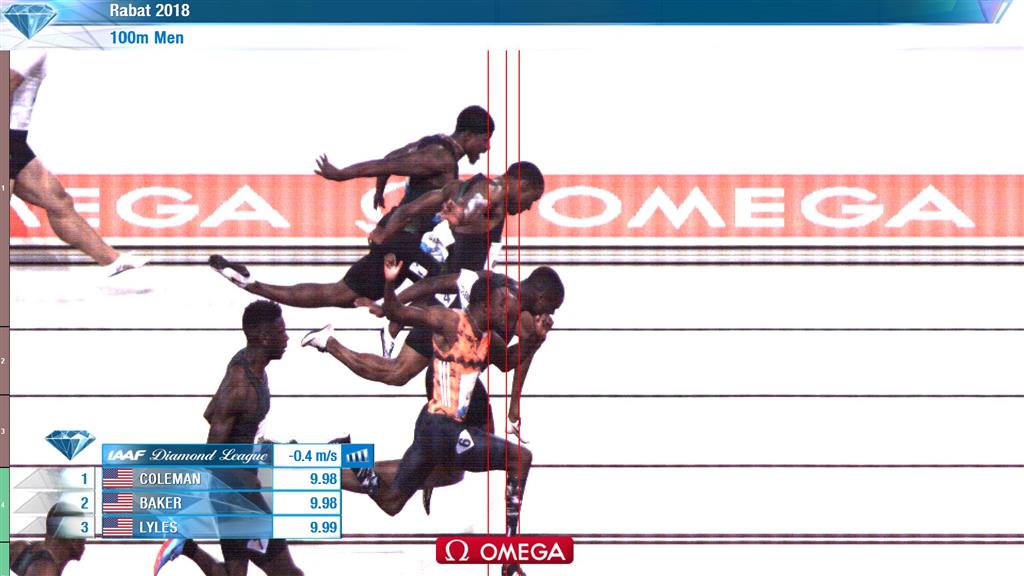 In other events, Olympic and world 800m champion Caster Semenya ran the fastest women’s 1000m in nearly 16 years, clocking 2:31.01 in the non-Olympic event.

Olympic 400m champion Shaunae Miller-Uibo of the Bahamas won the 200m in 22.29 seconds, overtaking Brit Dina Asher-Smith. U.S. champion Jenna Prandini was third in 22.60, one tenth ahead of rising Harvard senior Gabby Thomas, who won the Lausanne Diamond League 200m on July 5. Nigerian Blessing Okagbare-Ighoteguonor holds the fastest time in the world this year of 22.04.

Ethiopian Yomif Kejelcha won the 3000m by 1.33 seconds in 7:32.93, eight days after he was disqualified from a 5000m for nearly pulling another runner down by his shorts in Lausanne. American Paul Chelimo, the Olympic 5000m silver medalist, was fourth.

World champion Sam Kendricks of the U.S. won the pole vault with a 5.86-meter clearance. Rival and world-record holder Renaud Lavillenie was shockingly eighth with three fails at 5.60 meters.

The Diamond League moves to Monaco next Friday, with love coverage on Olympic Channel: Home of Team USA and NBC Sports Gold.