While now is very much an exciting time for Tetona Jackson, who has breakout roles in the HULU series All Night and the film All Styles (currently available on Showtime on Demand), her first tastes of the spotlight were on ice. Jackson grew up skating in the Los Angeles area—first at the Culver City Ice Arena (gone, but not forgotten) and then at the Skating Edge in Torrance—testing and competing.

“Skating was basically my entire life,” said Jackson, whose coaches were Derek James and Charlene Wong with choreography by Lorna Brown. “I would wake up, train, go to school, do homework and then go back and train. I actually did independent study for two years, so I could focus on skating. I competed and I loved it.”

Her biggest inspiration was Scott Hamilton, but Jackson also admired Surya Bonaly and Kristi Yamaguchi and looked up to Michelle Kwan, who had also been coached by James as a young skater. Toward the end of Jackson’s competitive career, Kwan’s sister, Karen Kwan Oppegard, taught at Skating Edge. 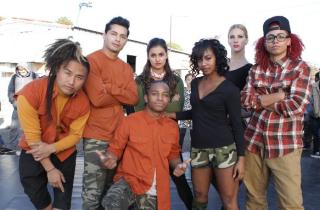 After competing at the U.S. Figure Skating National Showcase, Jackson realized the performance aspect of skating was what inspired her most. While recovering from an injury and deciding whether she would continue skating, Jackson heard Feld Entertainment, producers of Disney on Ice, was preparing to mount a national tour of High School Musical on Ice. One of the choreographers at the rink, Cindy Stuart, was involved with choreographing the show. Thus began Jackson’s pro career.

Rehearsals were intense, but Jackson thrived. Cast in the role of Taylor McKessie (played in the films by Monique Coleman), she also understudied Gabriella Montez (portrayed on screen by Vanessa Hudgens). The show ran about two and a half years. When it ended, Jackson didn’t know if her professional skating career would continue.

“Me being a black skater, I didn’t know if there were any other principal roles,” said Jackson.

Judy Thomas (in charge of casting for Disney on Ice) said a new princess themed show was being planned and Disney’s first African-American princess, Tiana, who hadn’t even debuted on screen yet, would be included in the ice show Disney on Ice Let’s Celebrate. Jackson was offered the role.

“Instantly, I said yes,” said Jackson. “That role was a lot of fun, but also nerve racking, since I was the first Tiana to appear anywhere.” 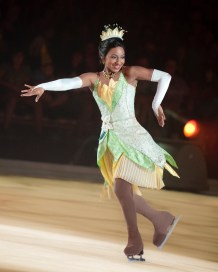 After several years of touring, she made the decision to get off the road. Back in Los Angeles, Jackson threw herself into dancing and acting. Having brought characters to life on the ice, she had a tremendous sense of performing. As she’s immersed herself in the world of auditioning, time and again the discipline and resilience from skating have been crucial.

“As a skater, training from such a young age—there is a discipline to getting up every morning at 4:30 and go skate,” she said. “My work ethic from skating is something I’m so thankful I am able to bring to acting.”

Jackson hasn’t skated in quite a while, but she’s itching to go back and train for fun. You never know if it could lead to an acting role.

Such was the case for acting sisters April and Violet Brinson, who were called upon to roller skate throughout the HBO limited series Sharp Objects. They’d grown up ice skating in Texas and Oklahoma, so when they were cast as friends of one of show’s main characters, they brought out their skating skills.

The teenage sisters, began skating just for fun as little kids in Austin, Texas, and then became more serious when the family moved to Oklahoma. Their coach was former Bulgarian competitor Boyko Aleksiev. They each skated for about six years, competing in regionals and sectionals and testing up through the junior level. 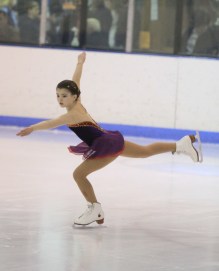 “We were both really passionate about skating,” said Violet. “It was something unique.”

While the Brinsons played their Sharp Objects roles with a bit of cheeky humor, in the final moments of the series, they were revealed as being accomplices to murder. The show didn’t air until almost a year after filming wrapped, so they steadfastly kept the plot twist to themselves. They hope more acting roles are coming their way and they’re open to all genres.

It was great to bring their skating background into Sharp Objects, their most high profile roles to date.

“We were both really excited to get to use that skill we had worked so hard to develop in another area we’re passionate about,” said April. “And it was really nice to get back on skates, even though they’re not ice skates.” 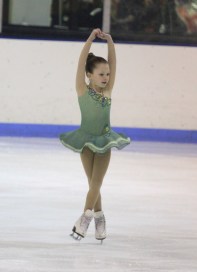 They haven’t been ice skating since moving to Los Angeles about two years ago, but they if there is a role that involves figure skating, they vow to get their skills up to speed.

“I would be so down for that, I would love it,” said Violet. “We learned discipline from skating. We also learned how to take corrections and apply them quickly, which is a valuable in acting.”

The 2030 Winter Olympic host, expected to be Salt Lake City or Sapporo, Japan, is no longer targeted to be decided before next fall, the IOC said in announcing wider discussions into the future of the Winter Games, including the possibility of rotating the Games within a pool of hosts.

The IOC Future Host Commission was granted more time to study factors, including climate change, that could impact which cities and regions host future Winter Olympics and Paralympics. The 2030 Winter Games host is not expected to be decided before or at an IOC session next September or October.

Hosts have traditionally been chosen by IOC members vote seven years before the Games, though recent reforms allow flexibility on the process and timeline. For example, the 2024 and 2028 Games were awarded to Paris and Los Angeles in a historic double award in 2017. The 2032 Summer Games were awarded to Brisbane last year without a traditional bid race.

Italy hosts the 2026 Winter Games in Milan and Cortina d’Ampezzo.

There are three interested parties for the 2030 Winter Olympics, the IOC said Tuesday without naming them. Previously, Salt Lake City, Sapporo and Vancouver were confirmed as bids. Then in October, the British Columbia government said it would not support a Vancouver bid, a major setback, though organizers did not say that decision ended the bid. All three cities are attractive as past Winter Games hosts with existing venues.

U.S. Olympic and Paralympic Committee officials have said Salt Lake City is a likelier candidate for 2034 than 2030, but could step in for 2030 if asked.

The future host commission outlined proposals for future Winter Olympics, which included rotating hosts within a pool of cities or regions and a requirement that hosts have an average minimum temperature below freezing (32 degrees) for snow competition venues at the time of the Games over a 10-year period.

The IOC Executive Board gave the commission more time to study the proposals and other factors impacting winter sports.

The IOC board also discussed and will continue to explore a potential double awarding of the 2030 and 2034 Winter Olympic hosts.

Also Tuesday, the IOC board said that Afghanistan participation in the 2024 Olympics will depend on making progress in safe access to sports for women and young girls in the country.

On Monday, Human Rights Watch urged the IOC to suspend Afghanistan until women and girls can play sport in the country.

In a press release, the IOC board expressed “serious concern and strongly condemned the latest restrictions imposed by the Afghan authorities on women and young girls in Afghanistan, which prevent them from practicing sport in the country.” It urged Afghanistan authorities to “take immediate action at the highest level to reverse such restrictions and ensure safe access to sport for women and young girls.”

The IOC board also announced that North Korea’s National Olympic Committee will be reinstated when its suspension is up at the end of the year.

In September 2021, the IOC banned the North Korean NOC through the end of 2022, including banning a North Korean delegation from participating in the Beijing Winter Games, after it chose not to participate in the Tokyo Games.

North Korea, formally known as the Democratic People’s Republic of Korea, was the only one of 206 National Olympic Committees to withdraw from Tokyo. The country made its choice in late March 2021, citing a desire “to protect our athletes from the global health crisis caused by the malicious virus infection.”

The IOC said in September 2021 that it “provided reassurances for the holding of safe Games and offered constructive proposals to find an appropriate and tailor-made solution until the very last minute (including the provision of vaccines), which were systematically rejected by the PRK NOC.”

A wild Grand Prix Final has a quadruple Axel, the Brits and a figure skating...

Justine Dufour-Lapointe, the 2014 Olympic moguls champion, is leaving the event to compete in freeriding, a non-Olympic skiing discipline.

“After three Olympic cycles and 12 years on the World Cup circuit, I felt that I needed to find a new source of motivation and had to push my limits even more so I can reach my full potential as a skier,” the 28-year-old Montreal native said in a social media video, according to a translation from French. “Today, I am starting a new chapter in my career. … I want to perfect myself in another discipline. I want to connect with the mountain differently. Above all, I want to get out of my comfort zone in a way I’ve never done before.”

Dufour-Lapointe said she will compete on the Freeride World Tour, a series of judged competitions described as:

There‘s a start gate at the summit and a finish gate at the bottom. That’s it. Best run down wins. It truly is that simple. Think skiers and snowboarders choosing impossible-looking lines through cornices and cliff-faces and nasty couloirs. Think progressive: big jumps, mach-speed turns and full-on attack. Think entertaining.

Dufour-Lapointe has retired from moguls skiing, according to a Freeride World Tour press release, though she did not explicitly say that in social media posts Tuesday.

Dufour-Lapointe also won the world title in 2015, then Olympic silver in 2018 behind Frenchwoman Perrine Laffont.

A wild Grand Prix Final has a quadruple Axel, the Brits and a figure skating...
Powered by WordPress VIP