Saturday marks 50 years since Dick Fosbury extended the U.S. track and field team’s dominance at the Mexico City Games with his revolutionary “Fosbury Flop” to take high jump gold, clearing an Olympic record height. Fosbury reflected on his career and that gold medal in “The Wizard of Foz: Dick Fosbury’s One-Man High-Jump Revolution,” published last month. Here is an excerpt from that book on the Mexico City final …

WHEN DICK FOSBURY curled backward over the bar, “a yowl” erupted from the Mexico City crowd like nothing Seattle Times columnist Georg N. Meyers had heard in the stadium all week. Never mind that the bar was set at the ho-hum height of 2.03 meters (6’8″); the reaction for Fosbury was strikingly loud. “From then on,” Meyers wrote, “every time the freckle-faced youngster from Medford poised and started at the bar, nothing else in the stadium existed for the fans.”

“Only a triple somersault off a flying trapeze with no net below could be more thrilling,” scrawled a German reporter, down the pressbox row from Meyers, on a notepad. Around the world, viewers seeing the style for the first time did double takes.

“I grew up with the roll and the straddle,” said Per Anderson, a jumper in the US, “but when I saw Fosbury on TV from Mexico City it absolutely took my breath away. The speed, lightness, and simplicity totally changed the way I looked at high jumping.” With the stadium crowd predominantly Mexican and with Mexico having no competitors in the event, it quickly became apparent who their favorite was: Dick Fosbury. The jumpers were all different sizes, shapes, and skin colors. They represented different countries. They wore an array of uniforms. But only one jumped backward over the bar. “The Mexicans love style,” wrote The Oregonian’s Leo Davis. “They adopted Dick immediately.”

This was it. Fosbury’s final attempt at 7’4¼”. He walked to his mark. At that precise moment, US marathoner Kenny Moore, in fourteenth place, was nearing the stadium from outside, his body wilted from having run twenty-six miles at 7,350 feet above sea level. A murmur emanated from the crowd as Fosbury took his mark. Moore started through the tunnel, where he glimpsed the rustcolored track, green grass, and through eyes blurred by fatigue, a highjumper. An American? Some white jumper. Foz?

Meanwhile, Fosbury’s focus sharpened. Anything “to fix” from the last jump? Nope; 7’4¼” was there for the taking. He knew it. He just needed to trust his body. You got this. He clenched and unclenched his hands in front of him and began his rocking, waiting for the merger of heart, mind, and soul. Whatever it takes. The murmur of the crowd rose a notch, then another. Ride their energy. Can do. Must do. Will do. Ever so subtly, the rocking back and forth intensified; there would be thirtyseven total, the crowd counting each one, the last few as if triggering a launch-pad countdown . . . three . . . two . . . one . . . ignition.

He took eight strides, each pulsing with purpose. Then came liftoff, followed by 0.9 seconds of silence—the reach for the sky, the arch of the back, the thrust of the hips, the moment of truth, the moment of relief, the softness of the Don Gordon pit on his back. Estadio Olímpico erupted with shrieks of delight; no moment, not even Beamon’s jump, had ratcheted up the roar of fans like this.

When Fosbury splashed down with the bar still in place, his joy became the joy of 80,000 fans, his smile their smiles, his two-finger peace symbol their two-finger peace symbol. For the fans, the celebration only sweetened after a weary Caruthers missed his final attempt. Not that he had failed (an Olympic silver medal is no athlete’s failure) but that Fosbury and the Flop had succeeded.

One of the worst prep high jumpers in Oregon was the new champion of the world, an Olympic gold medalist. For the first time since the 1956 Olympic Games, an American high jumper was atop track and field’s Mt. Everest.

Fosbury and Caruthers shook hands. The motor drives whirred. The crowd’s roar continued, as if the fans didn’t want to let go of their adopted hero. Fosbury shook hands with Gavrilov, the Soviet who eight months before in Seattle had first seen the Flop and said “it can’t be done.” He jogged around like a kid on stage after a school play who was waving at his parents.

Moore, the US marathoner, had broken into the sunlight of the stadium just in time for Fosbury’s jump. He had looked at the high-jump reader board: “2.24.” My God, Olympic record. “Way to go!” he yelled as he began his lap on the track. Fosbury pointed to a marathoner ahead of Moore. “Get that guy!” he yelled.

Dick’s mother, Helen, hopped up and down while hugging the Polks. Wagner whooped and hollered like a school boy, pumping his fedora into the sky with jabs from his arm. In Grants Pass, Dick’s father, Doug was “so thrilled I just about jumped through the ceiling,” he later told the press. “Told ya, told ya, told ya!” yelled Gail, back in Eugene. 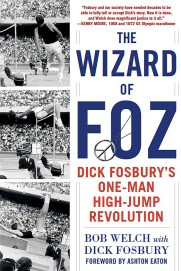 Nearby, Sweet hoisted his beer bottle in the air. “To the wizard of Foz!” And 141 miles up, in outer space, Walt Schirra and the crew of Apollo 7 silently completed another lap around earth, oblivious to the madness in Mexico City.

In the press box, an Associated Press reporter typed a thirty-word message that, in minutes, chattered across thousands of teletype machines in newsrooms around the world: “Sports Bulletin. (Mexico City) — Dick Fosbury . . . the upside-down jumper from Medford, Oregon . . . has won the Olympic high jump with a leap of seven-feet, four and onequarter inches.”

Down the row, Meyers, who back in January had called Fosbury “the funniest high jumper you ever saw” after the Seattle Invitational, placed his fingers on his portable typewriter and began his Monday story with the description that, “World records were a peso a dozen, but the glamour boy of track and field in the 1968 Olympic Games was a rawboned Oregonian who went belly-up to a Gold Medal and the most explosive ovation of the Mexico City entertainment.”

Down press row, Arthur Daley of the New York Times started his story. “No track and field athlete at the Olympic Games drew more whoops of delight or shrieks of disbelief from the crowds—and presumably from millions of pop-eyed television viewers—than did Dick Fosbury, the architect of an acrobatic maneuver that has become known as the Fosbury Flop,” he wrote.

Once the celebration died down, Fosbury tried three times to set the world record at 7’6″. He was close on the second, but it wasn’t to be. No matter. With his jump of 2.24 meters (7’4¼”), Fosbury had broken the Olympic record, besting Brumel’s and Thomas’s 2.18 meters (7’1¾”) mark from 1964. And he had jumped higher than any American in history, eclipsing Thomas’s old mark of 7’3¾”. He had jumped higher than all but two jumpers in the world, and with both having retired, was now the greatest active high jumper on the planet.

Soon an abbreviated Associated Press story was sent around the globe: “In an Olympic Games marred by political bickering, Black Power displays and rancor on many sides, [a] gangling 6-foot-4 college boy, a third-stringer on the U.S. Olympic team, delighted 80,000 people at Olympic Stadium by winning the high jump with one of the most unorthodox performances ever seen in bigtime sports.”

Beneath the stadium, Fosbury escaped a throng of reporters—“How does it feel?” . . . “How did you come up with this style?” . . . “What were you thinking?”—and melted into a deep sense of satisfaction. Ten months of competition. Of pressure. Of expectations. Of waiting. Of wondering. It was now all over, replaced by an unfamiliar sense of relief and relaxation, which he wasn’t going to let a throng of reporters spoil.

“Sorry, no interviews,” he told the officials. “But Señor Fos—.” “Sorry. I’m wiped. And wanna see my mom.” Along with the other two medal winners, he hid from the press while awaiting the medal presentation. Nearby, marathon medalists entered a room for drug testing.

Finally, in the evening darkness, Foz stepped to the top perch on the podium, all smiles, for the medal presentation. The National Anthem played and the American flag rose in the Mexican night, Dick’s patriotism manifesting itself not so much in a connection to a country but a city, Medford, full of flawed people like him, but folks who’d believed in him. Who sent him a telegram when he was at his lowest. All smiles, no tears. When the song ended, he flashed a quick peace sign, then spontaneously raised his right fist in solidarity with his friends Tommie Smith and John Carlos, now back in the US. Nobody booed or hissed.

Beyond a few marathon stragglers, the high jump had concluded the eight-day track and field competition. Smith, Carlos, Fosbury, and the rest of the US men’s team had won fifteen gold medals and twentyeight total, fifteen more than the Soviets’ count. The US had set eight world records. Beamon had uncorked perhaps the single most amazing athletic performance in track and field history. Sprinters Smith and Carlos had defied Brundage and made a victory-stand statement about human rights that rocked the world.

And Fosbury’s gold-medal Flop had put an exclamation mark on it all.