MELBOURNE, Australia — If this was it for Andy Murray, if this truly was it, he gave himself — and an appreciative, raucous crowd that included his mother and brother — quite a gutsy goodbye, the type of never-give-in performance he’s famous for.

What Murray could not quite do Monday at the Australian Open was finish off a stirring comeback and prolong what might just be the final tournament of his career.

Playing on a surgically repaired right hip so painful that pulling on socks is a chore, he summoned the strength and strokes to erase a big deficit and force a fifth set before eventually succumbing to 22nd-seeded Roberto Bautista Agut 6-4, 6-4, 6-7 (5), 6-7 (4), 6-2, Murray’s first opening-round loss at a Grand Slam tournament in 11 years.

“If today was my last match, look, it was a brilliant way to finish,” Murray said. “I literally gave everything that I had on the court, fought as best as I could, and performed a lot better than what I should have done with the amount I’ve been able to practice and train.”

Murray, just 31, is a year removed from his operation, and he said that he will decide in the next week or so whether to have a second one. If he opts to avoid another procedure, he might be able to play in July at Wimbledon, where he won two of his three major titles, including the first for a British man in 77 years. If he decides for further surgery, then Monday’s match might have been his last.

Even with a hitch in his gait, even as he leaned forward to rest his hands on his knees between points, Murray summoned the strength and the strokes to push the match beyond the 4-hour mark.

And the fans tried to will him past Bautista Agut, who had lost in straight sets all three previous matches the two men had played.

They roared when Murray managed to break back to 2-all on the way to taking the third set, with his mom, Judy, smiling widely as she stood alongside other spectators.

They chanted his name when he grabbed the fourth set.

They rose when the compelling contest ended.

“Andy deserves this atmosphere. Andy deserves (that) all the people came to watch him,” Bautista Agut said. “He’s a tough, tough fighter. A tough opponent. He gives everything until the last point. I want to congratulate him for all he did for tennis.”

Afterward, a video was shown in the stadium with tributes to Murray from various players, including rivals Roger Federer, Rafael Nadal and Novak Djokovic, along with Nick Kyrgios, Caroline Wozniacki, Karolina Pliskova and Sloane Stephens.

Federer opened his bid for a third consecutive Australian Open championship, and record seventh overall, with a 6-3, 6-4, 6-4 victory over Denis Istomin at Rod Laver Arena. Nadal, whose 17 career majors are second among men only to Federer’s 20, overpowered Australian wild-card entry James Duckworth 6-4, 6-3, 7-5 earlier.

Nadal, who had surgery on his right ankle in November, hadn’t competed since stopping during his U.S. Open semifinal in September because of a bad knee. 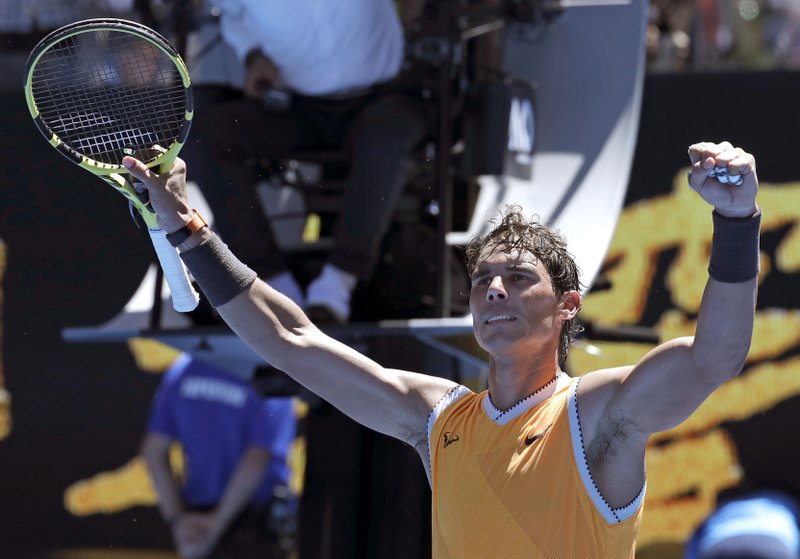 “It’s very difficult to start (again) after an injury,” Nadal said. “I know it very well.”

The most attention, though, was drawn by Murray, who is as popular for his success on the court as his attitude away from it.

The stands were dotted with British and Scottish flags and with signs of support. When Bautista Agut entered, he was greeted by a smattering of polite applause. When Murray was introduced, there were full-throated screams, followed by chants of his first name.

As play began, Murray delighted his well-wishers every so often with terrific shots on a full sprint and his trademark, quick-reflex returns. When he flubbed a shot or otherwise let a point slide by, Murray displayed the muttering and leg-slapping self-contempt the world has come to know and expect — and, let’s face it, love — from the guy.

For all that Murray accomplished over the years, including reaching No. 1 in the rankings and a pair of Olympic singles gold medals, he never was able to leave Melbourne with the trophy, finishing as the runner-up five times.

When Murray eventually succumbed to his weariness — not to mention Bautista Agut — the arena speakers blared Queen’s “We are the Champions,” with its fitting line: “And we’ll keep on fighting ’til the end.”

If this was, indeed, the end, Murray did just that.

Elena Fanchini, an Italian Alpine skier whose career was cut short by a tumor, has died. She was 37.

Fanchini, the 2005 World downhill silver medalist at age 19, passed away Wednesday at her home in Solato, near Brescia, the Italian Winter Sports Federation announced.

Fanchini died on the same day that fellow Italian Marta Bassino won the super-G at the world championships in Meribel, France; and two days after Federica Brignone — another former teammate — claimed gold in the combined.

Sofia Goggia, who is the favorite for Saturday’s downhill, dedicated her World Cup win in Cortina d’Ampezzo last month to Fanchini.

Fanchini last raced in December 2017. She was cleared to return to train nearly a year later but never made it fully back, and her condition grew worse in recent months.

Fanchini won her world downhill silver medal in Italy in 2005, exactly one month after her World Cup debut, an astonishing breakout.

In between her two World Cup wins, Fanchini raced at three Olympics with a best finish of 12th in the downhill in 2014. She missed the 2018 PyeongChang Olympics because of her condition.

This was a day filled with emotions. There is so much I’d like to share… but what weighs the heaviest is the loss of @elenafanchini. I’m sending my condolences to the whole Fanchini Family, who have had such a strong impact on our sport and world with their passion and kindness. pic.twitter.com/gmsLPVHX4I

USA Boxing will not send boxers to this year’s men’s and women’s world championships, citing “the ongoing failures” of the IBA, the sport’s international governing body, that put boxing’s place on the Olympic program at risk.

In a letter to its members, USA Boxing Executive Director Mike McAtee listed many factors that led to the decision, including IBA governance issues, financial irregularities and transparency and that Russian and Belarusian boxers are allowed to compete with their flags.

IBA lifted its ban on Russian and Belarusian boxers in October and said it would allow their flags and anthems to return, too.

The IOC has not shifted from its recommendation to international sports federations last February that Russian and Belarusian athletes be barred, though the IOC and Olympic sports officials have been exploring whether those athletes could return without national symbols.

USA Boxing said that Russian boxers have competed at an IBA event in Morocco this month with their flags and are expected to compete at this year’s world championships under their flags.

“While sport is intended to be politically neutral, many boxers, coaches and other representatives of the Ukrainian boxing community were killed as a result of the Russian aggression against Ukraine, including coach Mykhaylo Korenovsky who was killed when a Russian missile hit an apartment block in January 2023,” according to the USA Boxing letter. “Ukraine’s sports infrastructure, including numerous boxing gyms, has been devastated by Russian aggression.”

McAtee added later that USA Boxing would still not send athletes to worlds even if Russians and Belarusians were competing as neutrals and without their flags.

“USA Boxing’s decision is based on the ‘totality of all of the factors,'” he said in an emailed response. “Third party oversite and fairness in the field of play is the most important factor.”

A message has been sent to the IBA seeking comment on USA Boxing’s decision.

In December, the IOC said recent IBA decisions could lead to “the cancellation of boxing” for the 2024 Paris Games.

Some of the already reported governance issues led to the IOC stripping IBA — then known as AIBA — of its Olympic recognition in 2019. AIBA had suspended all 36 referees and judges used at the 2016 Rio Olympics pending an investigation into a possible judging scandal, one that found that some medal bouts were fixed by “complicit and compliant” referees and judges.

Boxing was not included on the initial program for the 2028 Los Angeles Games announced in December 2021, though it could still be added. The IBA must address concerns “around its governance, its financial transparency and sustainability and the integrity of its refereeing and judging processes,” IOC President Thomas Bach said then.

This past June, the IOC said IBA would not run qualifying competitions for the 2024 Paris Games.

In September, the IOC said it was “extremely concerned” about the Olympic future of boxing after an IBA extraordinary congress overwhelmingly backed Russian Umar Kremlev to remain as its president rather than hold an election.

Kremlev was re-elected in May after an opponent, Boris van der Vorst of the Netherlands, was barred from running against him. The Court of Arbitration for Sport ruled in June that van der Vorst should have been eligible to run against Kremlev, but the IBA group still decided not to hold a new election.

Last May, Rashida Ellis became the first U.S. woman to win a world boxing title at an Olympic weight since Claressa Shields in 2016, taking the 60kg lightweight crown in Istanbul. In Tokyo, Ellis lost 3-0 in her opening bout in her Olympic debut.

At the last men’s worlds in 2021, Robby Gonzales and Jahmal Harvey became the first U.S. men to win an Olympic or world title since 2007, ending the longest American men’s drought since World War II.

The Associated Press and NBC Olympic research contributed to this report.