While watching the 2002 Salt Lake Olympics, then-nine-year-old Mikael Kingsbury printed out the Olympic symbol on a piece of paper and wrote below it that he would win a gold medal. He taped it to the ceiling above his bed at his home in Quebec so that he could see it every night before he fell asleep. 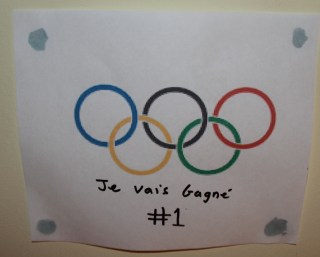 Sixteen years later, Kingsbury stood on top of the podium at the 2018 PyeongChang Olympics – and over 6,000 miles away in Quebec, his brother scribbled across the sign so it read, ‘you did win.’ The edited version is still hanging above Kingsbury’s childhood bed today. 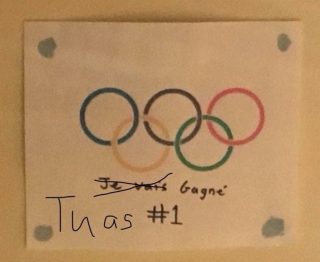 If anyone thought Kingsbury, 26, would take it easy now that he’s accomplished the goal he set at age nine, they were wrong. He opened his post-Olympic season with four-straight World Cup wins. If anything, he says his success in PyeongChang just inspired him more. “Winning gold just gave me more motivation,” he said in a phone interview at the end of January. “Once you reach the top, [you] want to stay there.”

In addition to his gold medal from PyeongChang, Kingsbury also owns silver from the 2014 Sochi Games. His dominance on the World Cup circuit is even more impressive. In 96 starts, he has stood on the podium 78 times, including 54 wins. His recent success is even more staggering: in his last 30 starts in singles moguls, he has won 23 times – and only finished off the podium twice. His strong results have helped him win seven-straight World Cup titles – and he’s well on his way to claiming an eighth this season. His consistency is even more improbable when you consider the unforgiving nature of moguls, an event that combines speed, form, and style – and is held on snowy slopes in ever-changing conditions.

Kingsbury’s record isn’t as flawless in world championship competition, though, something he says he’s hoping to improve upon this week in Park City, Utah. The singles competition will be held on Friday night, while the non-Olympic dual moguls event will take place on Saturday. At the 2017 World Championships, Kingsbury claimed bronze in singles, but placed 13th in duals.

“My last world championships didn’t go as well as I wanted it to,” Kingsbury said in January. “This year, [the world championships] are my main goal… I’m trying to be at my peak there.” Kingsbury has had plenty of previous success on ‘Champion,’ the slope at Deer Valley where this year’s World Championships are being held. (‘Champion’ is also the slope that was used at the 2002 Salt Lake Games, the competition that sparked Kingsbury’s gold-medal goal.) He has won the last four World Cup events at the venue,

The two-time Olympic medalist’s approach to competition is calculated carefully. In practice, he frequently skis up to a second-and-a-half faster than he generally does in competition. Because he typically qualifies in the top position heading into the final round, he’s able to watch his competitors go before him, and adjust his speed and tricks based on the score he thinks he needs.

Kingsbury also says his goals have changed since the PyeongChang Olympics, “Before it was only win, win, win. Now, it’s more about reaching my full potential.” He’s been working on new tricks to include in his repertoire and says he has a cork 1440 (four twists off-axis with skis crossed) ready to go if one of his competitor’s throws down the gauntlet.

He also trains double flips in the off-season, which are currently not approved for competition by the international ski federation (FIS). “I want to make sure I’m in the loop so if one day they say, ‘Ok, you can throw doubles,’ I’ll be ready.”

Kilde won Sunday’s super-G by two tenths of a second over Odermatt, one day after edging Odermatt by six hundredths. France’s Alexis Pinturault took third as the podium was made up of the last three men to win the World Cup overall title, the biggest annual prize in ski racing.

This season’s overall figures to be a two-man battle between Kilde, the 2019-20 champion, and Odermatt, the reigning champion, and could come down to March’s World Cup Finals. They’ve combined to win the first five of 38 scheduled races.

The top American Sunday was River Radamus, who finished an impressive 16th given his start number was 57. Radamus’ best event is the giant slalom.

Ryan Cochran-Siegle, the Olympic super-G silver medalist, and Travis Ganong, who was third in Beaver Creek last year, both skied out.

The men’s World Cup heads next weekend to Val d’Isere, France, for a giant slalom and slalom.

NBC Sports and Peacock combine to air live coverage of the 2022-23 Alpine skiing season, including races on the World Cup, which starts this weekend.

Coverage begins with the traditional season-opening giant slaloms in Soelden, Austria, this Saturday and Sunday, streaming live on Peacock.

The first of four stops in the U.S. — the most in 26 years — is Thanksgiving weekend with a women’s giant slalom and slalom in Killington, Vermont. The men’s tour visits Beaver Creek, Colorado the following week, as well as Palisades Tahoe, California, and Aspen, Colorado after worlds in Courchevel and Meribel, France.

Mikaela Shiffrin, who last year won her fourth World Cup overall title, is the headliner. Shiffrin, who has 74 career World Cup race victories, will try to close the gap on the only Alpine skiers with more: Lindsey Vonn (82) and Ingemar Stenmark (86). Shiffrin won an average of five times per season the last three years and is hopeful of racing more often this season.