NBC Sports Gold streaming begins at 1:30 p.m. ET with second-day decathlon events. NBCSN’s broadcast begins at 7 p.m., capped by the men’s and women’s 100m finals, where the top three are in line to qualify for the individual 100m at the world championships in Doha in two months.

Felix, the nine-time Olympic medalist at her first meet in 13 months and as a mom, races for a spot in Saturday’s 400m final. She admitted not to be near her top form before and after placing 11th in the first round on Thursday.

Felix must place in the top four of her semifinal heat at 8 p.m. ET to advance and keep realistic hope of making her ninth straight world championships team.

Coleman, the fastest man for three straight years, leads the men’s 100m field tackling semifinals (7:02 p.m.) and the final (8:03). His already strong hopes of qualifying for worlds are boosted by the fact that Justin Gatlin has a bye into worlds as defending champion, giving the U.S. four total spots in the event in Doha.

Likewise, defending U.S. champion Aleia Hobbs doesn’t have to worry about 2017 World champion Tori Bowie in the women’s 100m semifinals (6:48 p.m.) or final (8:44). Bowie scratched out of Thursday’s first round but will grab her bye into the worlds 100m if she simply appears in the long jump or 200m later this weekend.

But Hobbs could be challenged by fellow former LSU Tiger Sha’Carri Richardson, a 19-year-old who won the NCAA Championships in 10.75 seconds to become the ninth-fastest woman in history. 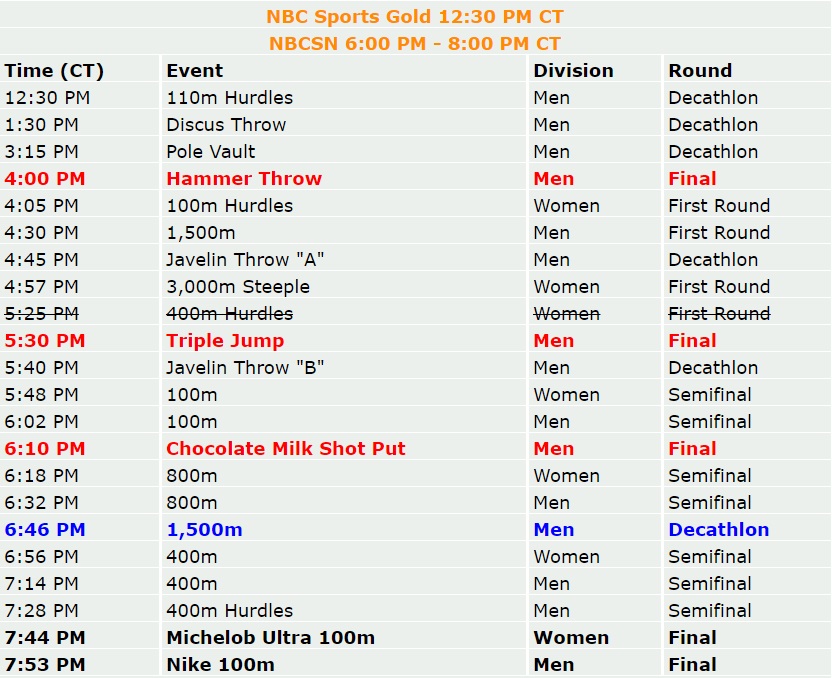