FIVB, the international volleyball federation, has asked Argentina’s federation to answer for gestures made after the team qualified for the 2020 Tokyo Olympics on Sunday.

Several players used their fingers to make their eyes appear slanted, an offensive gesture throughout much of Asia. Major League Baseball suspended Houston first baseman Yuli Garriel for five games after making such a gesture, albeit accompanied by a direct verbal insult toward Los Angeles pitcher Yu Darvish, in the 2017 World Series.

“The FIVB has seen the photographs of the Argentinian men’s volleyball team celebrating their victory at the Tokyo Volleyball Qualification Tournament with inappropriate and culturally insensitive gestures,” the federation said in a press statement. “Last week the FIVB made it clear that these type of actions by players and official representatives of national volleyball teams are completely unacceptable. The FIVB is urgently seeking an explanation from the Argentinian National Federation to ensure that all involved understand that their actions will have caused great offence, even if there was no such intention to do so.”

The team qualified by winning a five-set thriller over China, which hosted the qualification event.

Argentinian star Facundo Conte is well-known in the Chinese volleyball community for his years playing with Shanghai Golden Age, and he faced an onslaught of pointed comments on his Instagram feed:

“Dude, explain you behavior please, you spent 2 seasons in Shanghai, you were respected, and show your respect to Chinese,” wrote one person with an unprintable Instagram ID.

“I’m the one who got your T-shirt last night .. excited .. but I feel upset about your behavior (emoji) can you explain to people that you meant no harm?” wrote Instagram user ykj629. 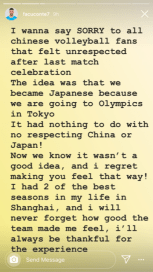 “The idea was that we became Japanese because we are going to Olympics in Tokyo,” Conte said. “It had nothing to do with no respecting China or Japan! Now we know it wasn’t a good idea, and i regret making you feel that way!”

Argentina has reached the quarterfinals of the last two Olympics, losing each time to Brazil.

The team also won the Pan Am Games tournament for second consecutive time earlier this month without Conte, the MVP of the 2015 tournament.