The Tokyo Paralympic medals, which like the Olympic medals are created in part with metals from recycled cell phones and other small electronics, were unveiled on Sunday, one year out from the Opening Ceremony.

In a first for the Paralympics, each medal has one to three indentation(s) on its side to distinguish its color by touch — one for gold, two silver and three for bronze. Braille letters also spell out “Tokyo 2020” on each medal’s face.

For Rio, different amounts of tiny steel balls were put inside the medals based on their color, so that when shaken they would make distinct sounds. Visually impaired athletes could shake the medals next to their ears to determine the color.

The design is centered around the motif of a traditional Japanese fan, depicting the Paralympic Games as the source of a fresh new wind refreshing the world as well as a shared experience connecting diverse hearts and minds. The kaname, or pivot point, holds all parts of the fan together; here it represents Para athletes bringing people together regardless of nationality or ethnicity. Motifs on the leaves of the fan depict the vitality of people’s hearts and symbolize Japan’s captivating and life-giving natural environment in the form of rocks, flowers, wood, leaves, and water. These are applied with a variety of techniques, producing a textured surface that makes the medals compelling to touch. 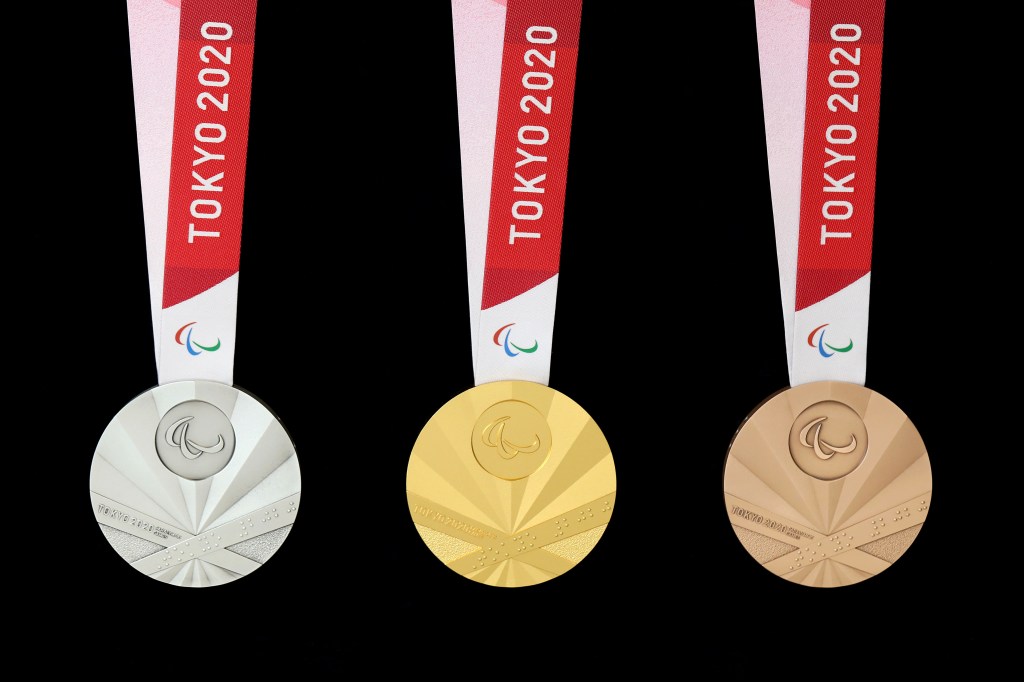 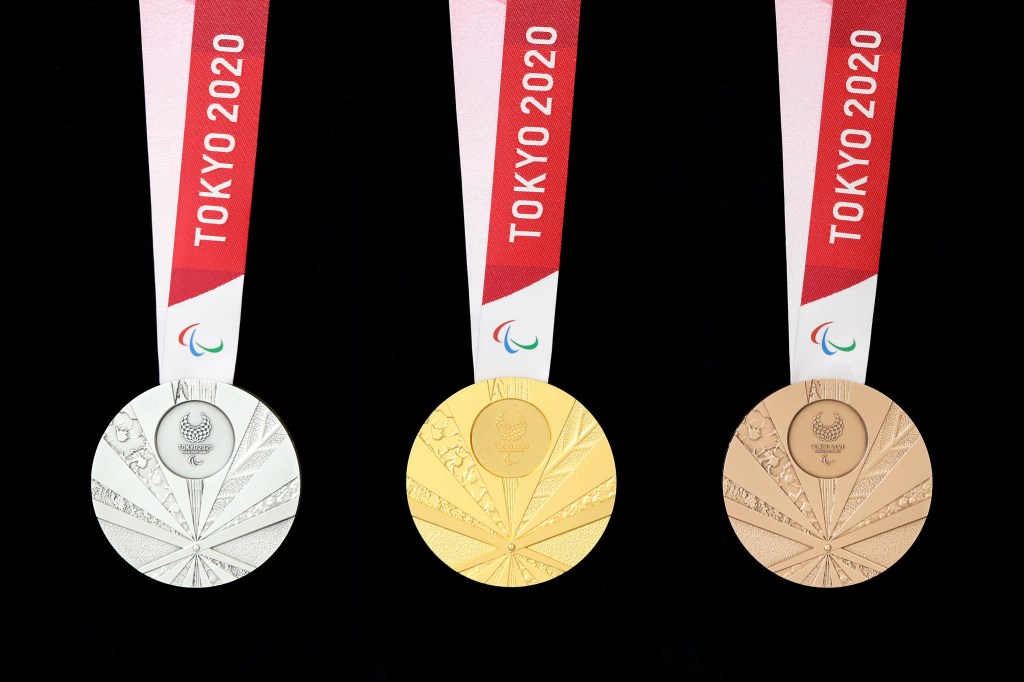 GREENSBORO, N.C. — Here, the NBC Sports figure skating contributors reflect on the standout moments of the 2020 U.S. Figure Skating Championships. Nathan Chen and Alysa Liu of course come to mind, though there were plenty of other moments to remark upon along the way.

1. Alysa Liu proved that she could do it again. She validated her insistence that there was no more pressure in successfully defending a title compared to winning her first title.

Plus, the amusement of seeing the 4-foot-10 14-year-old needing help ascending the top step of the awards podium doesn’t get old either. Mariah Bell and Bradie Tennell helped hoist her for the second year in a row. Liu next competes at world juniors, where she will take on a formidable pair of Russian “K’s”: Kamila Valieva and Ksenia Sinitsyna, both of whom outscored her on the Junior Grand Prix circuit. To win the crown, Liu may need a fully rotated quadruple Lutz, something that eluded her in Greensboro.

2. Speaking of Bell, she comes out of the championships with her already-improving confidence another notch higher after the free skate of her life and her best nationals finish ever, a silver medal. In tears before she even hit her final pose, she deservedly got an overwhelming standing ovation.

When asked how she felt about being the No. 1 senior U.S. woman, she said, “It’s a very special feeling. I haven’t had that before in my career, so that was awesome. The coolest thing about it was how into it the crowd was.”

Now, let the calculations begin: can Bell and Tennell gain three U.S. women’s spots for next season’s world championships? To do so, the sum of their placements at the 2020 World Figure Skating Championships cannot be greater than 13 (for example, sixth and seventh).

3. Rounding out the memorable moments of the women’s event were the returns of Olympians Karen Chen and Gracie Gold. Chen, the 2017 national champion, missed the entirety of last season with a right foot stress fracture, and now is a freshman at Cornell. She finished fourth, and gained an assignment at the Four Continents Figure Skating Championships early next month. With her competitive juices flowing again, Chen told reporters she was considering taking a gap year from college.

Two-time U.S. champion Gold, of course, triumphed simply by qualifying for her first national championships since 2017 after time away from the sport for treatment for depression, anxiety and an eating disorder. After a mediocre short program, Gold did a respectable free skate, and the crowd gave her a standing ovation, an emotional reward that left her with grateful tears. It moved Gold, who finished 12th, to vow she would continue her comeback for at least another season.

4. Nathan Chen’s fourth straight U.S. title puts him in the company of five men since World War II, all of whom won Olympic gold medals, with Brian Boitano (85-88) the most recent. Chen, a Yale sophomore, was the first to do it in the IJS and quadruple jump eras (he went six-for-six in quads in the two programs), and the fourth came after a case of the flu bad enough he could practice only intermittently the first two weeks of January. “I don’t know anybody who could recover and do what he did after that sickness,” coach Rafael Arutunian said of Chen.

5. Tomoki Hiwatashi’s continued improvement: two clean programs with three clean quads for the bronze medal. His showmanship, including Russian split jumps, are to die for. Last season, Hiwatashi finished a surprise fourth at nationals but had disappointing 10th and fifth places in his debut competitions on the senior Grand Prix debut. The 2019 world junior champion has put himself into the mix for a 2022 Olympic team spot — if he can improve his consistency.

6. Except for that pesky quad, Jason Brown put it all together at nationals for the first time since 2014. If he can execute all the elements as brilliantly as he did in Greensboro, a clean quad might put him in bronze medal contention at the 2020 World Championships, given the consistent inconsistency of all the top men after Chen and Japan’s Yuzuru Hanyu.

7. In the past month, Vincent Zhou turned his life inside out, taking a leave from Brown University to focus on skating after completing the first semester of his freshman year and switching coaches to Lee Barkell and Lori Nichol in Toronto. Despite that upheaval and little intense training, the reigning world bronze medalist and 2019 U.S. silver medalist had two solid performances to finish fourth, strategically limiting his quads to one in each program. Although Zhou had skipped the Grand Prix season, his choice as a world team member over Hiwatashi was totally justified under the selection criteria in use.

8. Madison Chock and Evan Bates made ice dance — and figure skating — history when they became the first U.S. skater, couple or pair team to go five years between national titles since the 1920s. They topped two duos they train with, Madison Hubbell and Zach Donohue, and Kaitlin Hawayek and Jean-Luc Baker, to win their first title since 2015, also won in Greensboro. Their widely acclaimed slithering “Snake Charmer” free dance likely sets them up to glide to the world championship podium, but another showdown with Hubbell and Donohue awaits at Four Continents.

9. Jessica Calalang and Brian Johnson had a breakthrough moment in the pairs’ event with one of the most memorable free skates in the last 20 years. Calalang’s joyous disbelief was palpable when she and Johnson got their score (146.01, the highest ever at nationals) for a program that had the crowd out of its seats before it even ended.

Added Johnson: “No one can take that moment away from us.”

Especially poignant words as Calalang and Johnson were passed over in favor of Ashley Cain-Gribble and Timothy LeDuc for the world championships teams. Calalang and Johnson are slated to participate at Four Continents, where they can continue to build a body of work that will impress U.S. Figure Skating’s International Selection Committee next time around.

10. Alexa Scimeca Knierim and Chris Knierim won their third U.S. pair title in Greensboro, joining such company as John Zimmerman and Kyoko Ina, Jenni Meno and Todd Sand, and Jill Watson and Peter Oppegard. The couple skated a clean and memorable short program to “At Last,” including side-by-side triple toe loops. In the free skate, though, Knierim fell on his triple toe and the skaters doubled their planned triple Salchows. Despite their superior triple twist and lifts, in order to crack the top five in the world, Scimeca Knierim and Knierim need to get consistent on their jumps, and the California-based skaters are working with Arutunian to do so. A Winter X Games competition due to be held in Chongli, China, next month has been postponed due to the outbreak of the coronavirus in China.

“Due to the ongoing coronavirus concerns, the X Games Chongli 2020 event will be postponed until a later date,” organizers announced via Twitter. “The safety of our athletes, staff and spectators is our top priority, and we will continue to closely monitor the situation.”

The competition would have been the first Winter X Games held in China. Shanghai has hosted many X Games in the summer, including a event last June.

As with an Alpine skiing World Cup event that was canceled Wednesday, the X Games were due to take place at a 2022 Olympic venue, Chongli’s Secret Garden ski report. The venue hosted a World Cup snowboard event in December.

Several of the most decorated X Games and Olympic athletes, including two-time Olympic snowboard slopestyle champion Jamie Anderson, were scheduled to compete in China.

The coronavirus outbreak has also affected qualifiers for the 2020 Olympics, with boxing and women’s soccer tournaments moved from Wuhan, the epicenter of the outbreak. Asia-Oceania boxing qualifiers will be held March 3-11 in Amman, Jordan, with coverage on the Olympic Channel. The women’s soccer qualifiers, including traditional power China and a strong Australian team, were originally moved to Nanjing but then moved to Sydney, Australia.

China’s team has arrived in Australia but is under quarantine, putting the start of the qualifiers in doubt.

Aspen hosted the biggest X Games competition of the winter last week. Another X Games is scheduled for March 7-8 in Norway.

Australian Open Semifinals: How to watch Roger Federer vs. Novak Djokovic January 28, 2020 10:44 am