German Marcel Kittel won a bunched sprint finish for the second time in the first six stages of the Tour de France on Thursday.

There were no significant changes in the overall standings. Chris Froome, a three-time Tour champ, still leads by 12 seconds over teammate Geraint Thomas.

Demare, the Stage 4 winner, kept his lead over Kittel in the green-jersey standings, thanks in part to points from an intermediate sprint earlier in Thursday’s stage.

Nobody left in the field has captured a sprint classification title with five-time winner Peter Sagan thrown out of the Tour for making contact with 2011 winner Mark Cavendish on Tuesday. Cavendish crashed and broke a shoulder blade, forcing his abandon from the Tour.

An appeal by Sagan’s team to the Court of Arbitration for Sport was rejected Thursday.

Friday’s Stage 7 is a flat, 134-mile trip from Troyes to Nuits-Saint-Georges in eastern France. It should feature another bunched sprint to the finish ahead of a summit finish Saturday. 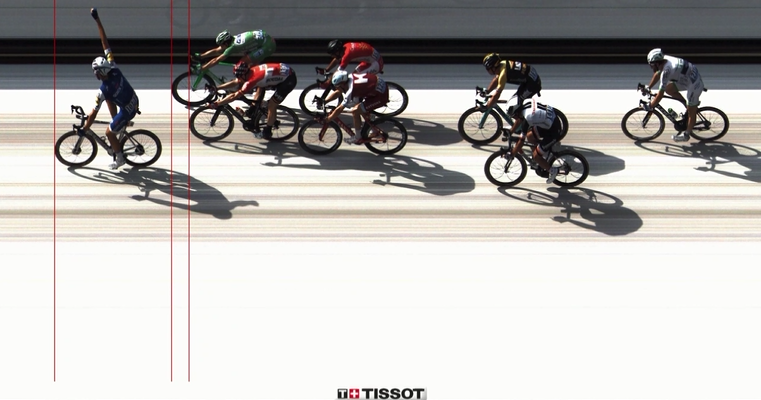 Mark Cavendish crashed hard in the final straightaway sprint after colliding with Peter Sagan at the Tour de France on Tuesday.

The 30-time Tour stage winner said he reinjured his right shoulder but did not have specifics.

“I’m not a doctor, but the feelings, I’m not optimistic,” Cavendish said, his right arm wrapped in a sling.

Arnaud Demare won the stage after multiple crashes in the last mile, becoming the first Frenchman to win a bunch sprint since 2006.

Shortly before that, Tour leader Geraint Thomas hit the pavement due to riders crashing ahead of him but appeared not to suffer serious injury. He retained the yellow jersey.

Then, on the final straightaway, Cavendish was squeezed into a barrier on the right side after colliding with Peter Sagan‘s right arm.

Cavendish spent minutes on the ground but eventually got back on his bike and rolled across the finish line favoring his right arm. The right side of his jersey was ripped apart, and Cavendish’s right hand was bandaged.

“I get [along] with Peter,” Cavendish repeated. “If he came across it’s one thing, but his elbow, I’m not a fan. … I’d like to know about the elbow.”

Sagan said he didn’t have time to move left as Cavendish came up his right. The five-time Tour green sprinters’ jersey winner said he apologized.

“Yeah, for sure, because it’s not nice to crash like that,” Sagan said.

Cavendish is riding this year’s Tour after being diagnosed with the Epstein-Barr virus in April. He has 30 career Tour stage wins, four shy of Eddy Merckx‘s record.

Cannondale–Drapac’s Nate Brown, who on Monday took the King of the Mountains polka-dot jersey from countryman Taylor Phinney, retained that jersey Tuesday. He’s the first American to do so in Tour history.

Wednesday’s Stage 5 is 100 miles, but the key is the final eight kilometers. The general classification contenders will be put on notice on the short, steep ascent to the La Planche des Belles Filles. This is where Chris Froome won his first Tour stage in 2012.